New and Noteworthy---Connecticut Yankees At Antietam: A Fascinating and Very Humane Segment of Civil War History 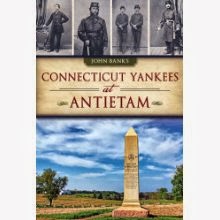 The soldiers are members of the 8th, 11th, 14th and 16th Connecticut infantry and their stories are told by their letters, diaries, pension files, photographs and artifacts they left behind. The author includes the story of Maria Hall, a nurse at the Smoketown Hospital, who was one of the many women rejected by Dorthea Dix but found her way to serve the wounded on the battlefield. Also, Banks offers the story of William Roberts, a Connecticut undertaker, who travelled in October to the September battlefield in order to locate and disinter eight bodies and return them to their families.

At times Connecticut Yankees At Antietam may be grim. Banks has collected instances of amputations made by manual chain saws, survivors of wounds that did not receive aid for nearly 48 hours. The instances of wounding, deaths and imprisonment of fathers and sons are many. Banks is careful not to carry the stories beyond the evidence provided by the primary documents available; there is no speculation of probable endings in the book. Terry Reimer of the National Museum of Civil War Medicine, Bob Zeller of the Center for Civil War Photography, Ted Alexander and Stephanie Gray of the Antietam National Military Park and many local Connecticut historians and reenactors gave Banks a hand in bringing forward the fascinating and very humane segment of Civil War history.