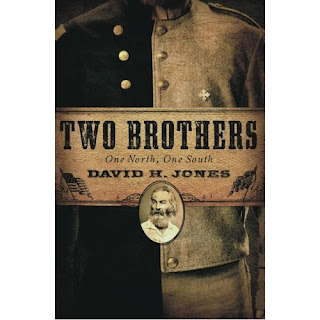 With a diligent handling of the primary sources and a creative approach, David Jones has crafted a fine story of Maryland brothers who are Civil War soldiers, one in blue the other in gray. With settings in Baltimore, Armory Square Hospital in Washington, D.C, and Virginia's battlefields, the author describes historic events from 1861 to 1865. The story is propelled forward by Walt Whitman who comforted soldiers at the Armory Square Hospital and where, in his post-war recollections, he states that he found two brothers in two different wards: Clifton Prentiss a brevet Union Colonel and William Prentiss, an enlisted Confederate soldier.

In Jones' novel, Whitman frequently visits the severly wounded William Prentiss and sits through his passing, and then gathers his two civilian brothers and his wounded brother, who was in the same hospital, together a few days after William's death. In the course of the story, John and Melville tell the civilian side of the war, Clifton the Union side of the war and Whitman the Confederate side of the war as it was told to him by William.

Jones faithfully pays attention to the war's social aspects. Friends of the Prentiss family, Hetty, Jenny, and Constance Cary are themselves divided by the war, their friendships and their loves during the war. At one pont on the veranda of Jefferson Davis' White House, the ladies discuss the role of women. The women past through joy and grief at weddings and funerals that held at St. Paul's Episcopal Church in Richmond. The Prentiss family's free black servant, Elijah, leaves his wife and children to become a sergeant in the 7th U.S. Colored Regiment and the war, as viewed by blacks, is discussed around the unit's campfires.

The Prentiss brothers are reunited during a Federal assault on the Army of Northern Virginia in the Petersburg trenches. Each is founded within yards of the other; here in the story Jones is not recklessly melodramatic. He has the soldiers act like soldiers and not as Victorian era, post-war sentimentalists. With a writing style that is direct and to the point, Jones handles the myriad of characters well. No one character sees everything nor understands everything. It is in the meeting of the four storytellers that the full story is revealed.

There are times though that some characters speak as encyclopedia entries, listing and detailing lives that are tangential to the main story. It is interesting that Union General Benjamin Butler attended the 1860 Democratic conventions (there were three) and voted for the nomination of Jefferson Davis over 50 times, but it doesn't contribute to the main characters development or background story. At times a reader may feel that these characters did not exist outside the story because the events they expierence are so much greater than themselves.

An advanced placement U.S. history high school student who loves the Civil War could enjoy this novel as well as most Civil War buffs. Two Brothers does not read like Killer Angels though. Sharra's style, which is similar to Hemingway's newspaperman's writing style, is unlike Jones' more extensive descriptions of individual actions and behaviors. The author's diligence in staying close to the sources and also carefully layering the stories reminds CWL of John Dos Passos' hallmark USA Trilogy: 1919, The Big Money, and the 42nd Parallel. Like Dos Passos, Jones has achieved writing an intriguing tale of the nation and several individuals' stories while allowing the individuals to tell them.
Posted by Rea Andrew Redd at 4:26 PM