Off Topic---Novel Review by Ron Maxwell: Victory by Longbow 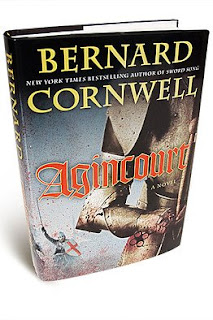 Victory by Longbow: A famous battle, seen through the eyes of an English archer, A review by Ron Maxwell of Agincourt, Bernard Cornwell, Harper Publishing, 451 pages, $27.99.

For every English boy, there is an instant when it's two o'clock on an October afternoon in 1415. The decisive English victory at Agincourt, with the annihilation of the numerically superior French army and the massacre of most of the Frenchmen who had surrendered, was noted by contemporary observers as an epochal event, and rightly so. Even in the context of the punishing Hundred Years War, Agincourt stood out for its brutality, its heroism, its impossible result. It was the sort of event that could only be understood and explained in metaphysical terms. God must have had a hand in its outcome. So they wrote at the time.

With the military leadership of the French lying in heaps of bloody and dismembered corpses -- and with the few titled survivors held for ransom in England -- it would take another generation for France to regroup and to reassert its sovereignty and destiny in the person of Joan of Arc. Fourteen years would pass before the French would avenge the humiliation of Agincourt at Patay, a battle in which France's mounted knights, tutored by past mistakes and wary of the English longbow, flanked the English army's archers instead of charging them head-on, as they had at Agincourt.

With his novel "Agincourt," Bernard Cornwell leads us into this world with the hypnotic skill of an old seer seated about an ancient campfire. Of course Shakespeare, with "Henry V," has already taken us on this journey, as seen through the eyes of England's young king. Mr. Cornwell selects for his protagonist a man as lowly as the king is exalted, as powerless as the king is omnipotent. By the end of this gripping novel we understand that it was the common soldier -- personified by a man named Nick Hook in Mr. Cornwell's telling -- who embodied the English character and in large measure determined the outcome of its military adventures. Revealing as well is the fact that Hook is exceptionally skilled at a particular kind of warfare -- shooting arrows with a longbow.

Anyone who has ever held a bow and arrow will savor Mr. Cornwell's affectionate descriptions of designing, crafting, maintaining, transporting and fighting with this weapon. He emphasizes that it was the English archer who often made the critical difference in 15th-century battle. He was trained from youth to develop the muscles of his arms, chest and back in order to acquire the reserves of strength to repeatedly draw a bowstring that most strong men could barely pull half-way -- and trained as well in the art of guiding the arrow's flight to his prey.

King Henry is still central to the historical event, and he is prominent in Mr. Cornwell's novel. Disguised as an anonymous knight, he wanders through the English positions on the night before the great battle. We've been here before, but we're standing on slightly different ground, listening to somewhat different voices. Far from competing with Shakespeare, these scenes offer a quiet and unobtrusive homage to theatrical moments already seared into our collective consciousness.

The battle at Agincourt established an English presence in France that would outlast all of its combatants and contemporaries. Mr. Cornwell gives us some perspective for the large historical event by starting his novel more than a year earlier, in the English countryside, where we first meet Hook as well as his nemesis, a leering man of the cloth prone to quoting biblical Scriptures that don't exist but that sound as if they might. A turn of fate accompanied by the voice of a saint compels Hook to enlist as a mercenary in the employ of Burgundy, where he finds himself part of a company of English archers defending a French town then under siege during a civil war among French fiefdoms.

To his credit, Mr. Cornwell provides just enough "history" so that we're never in doubt of who's fighting whom or who's on who's side. Whose side God is on (and how can we be sure?) is a more difficult matter for these characters to divine. "Hook often wandered the cathedral [at Soissons]," Mr. Cornwell writes, "staring at the painted walls or at the rich altars decorated with silver, gold, enamel, and finely embroidered silks and linens. He had never been inside a cathedral before and the size of it, the shadows far away in the high roof, the silence of the stones, all gave him an uneasy feeling that there must be something more to life than a bow, an arrow, and the muscles to use them. He did not know what that something was."

A few months later Hook, by now something of a veteran, finds himself in the mighty fleet of 1,500 vessels carrying King Henry and his invading army to Harfleur, where they begin a siege of the walled city. In the space of a year, Hook has gone from the besieged to the besieger, from the defender to the attacker. Between the two encounters Mr. Cornwell paints a vivid, harrowing portrait of the ordeal of medieval warfare, with trebuchets, catapults, primitive cannon, vats of boiling oil and crossbow bolts -- even the claustrophobic hell of an underground clash as two tunneling armies collide under the walls of Harfleur.

Until recently, most adolescent boys growing up in the Western world have had the dream of being a knight in shining armor, part of a world involving chivalry, damsels in distress, brightly caparisoned destriers, turreted and crenellated castle walls, tapestries, tournaments, broad swords. These elements are present in Mr. Cornwell's story, but only as a thin outer layer that gets peeled away with every turn of the page. Here the medieval world transitioning to the Renaissance is much closer to Hobbes's vision of humanity: "continual fear, danger of violent death; and the life of man, solitary, poor, nasty, brutish, and short."

Mr. Cornwell does not over-adorn the splendor, opulence and high art of Europe at the beginning of the 15th century. But neither does he obscure its darker side: numbing cold, clawing hunger, savage hand-to-hand fighting, the burning of heretics, the arbitrariness of justice and the arrogance of power. Plus ça change, plus c'est la même chose.

Mr. Maxwell has written a cinematic trilogy on Joan of Arc titled "The Virgin Warrior." He wrote and directed the motion pictures "Gettysburg" and "Gods & Generals." His Web site can be found at www.ronmaxwell.com.