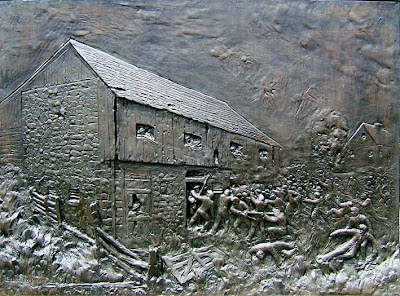 John Archer sets out the key elements and effects of the nearly continuous fight for the Bliss Farm on July 1-3. Having lost two sons to western New York state's harsh winters, John Bliss sold his farm and moved his family to Adams County, Pennsylvania in 1857. There within six years he would lose everything except his life and the lives of his family.

Located on the west side of the Emmitsburg Pike and opposite of the Brian Farm on Cemetery Ridge, Bliss' 59 acres were in the path of Longstreet's July 2nd assault and the Pickett-Pettigrew-Trimble Assault of July 3rd. Noting the arrival of Buford's Division on June 30 and Reynold's Corps on July 1st, the Bliss family fled with nothing except the clothes on their backs. Around noon on July 1st the flight was so hasty that a prepared meal was left in the kitchen the homes' front doors doors were left open. Confederate skirmishers were ensconced in the buildings by late evening of July 1st.

As Longstreet's July 2nd en eschelon attack rolled from south to north, Wright's Georgia brigade's left wing encountered the Cordori farmstead and pushed aside the 82nd New York, the 15th Massachusetts and Brown's battery. The brigade crested Cemetery Ridge, then forced the 13th Vermont, the 7th Michigan and the 59th New York back. On Wright's brigade(Anderson's division) left, Wilcox's and Lang's brigade were trading volleys with the 1st Minnesota and the 19th Maine. On Wright's right Posey's brigade (Pender's division) engulfed the Bliss farmstead held by the 12th New Jersey. Posey's brigade were nearly fought to a standstill who had turned the the barn and house into a bastion. Though Posey's brigade pushed the New Jersey soldiers out of the farmstead, the Mississippians appeared to be fought out and stayed on the west side of Emmitsburg Road while Wright briefly held a portion of the crest of Cemetery Ridge.

During the course of the battle, LBG John Archer states that the Bliss farmstead exchanged hands 10 times. In this respect, the Bliss Farm is quite similar to the Wheatfield which was probably exchanged 8 times. On the morning of July 3rd, the buildings exchanged hands at least twice before Union general Alexander Hays ordered both the barn and the house burned. During the Grand Assault, Brockenbrough's brigade marched past the smoking ruins but also, like Posey's brigade, stopped short of the Emmitsburg Road.

John Bliss filed a claim for $2,500 to $3,500 in damages three different times. The federal government turned him down twice because the farm buildings were used by the Rebels. The Pennsylvania legislature passed a bill for the amount to be paid but a check was never written. Bliss lost about $2,500 in buildings, improvements, tools, equipment crops, cattle and personal belongs when he sold the farm to Nicholas Cordori for $1,000 in 1866. Archer quotes Bliss as later saying "Let it go. I would give twenty farms for such a victory." The family returned to western New York stay where it maintained a meager existence.

Archer recommends Woodrow Christ's book on the Bliss Farm and several articles in Gettysburg Magazine. He notes that the fighting and the importance of the Bliss Farm was generally overlooked until Christ's book, Over a White Hot Crimson Plain, appeared in the mid-1990s. Archer's descriptions include many remarks made by the soldiers. Of course, the viewer would do well to have the McElfresh Watercolor Maps or the Friends of the National Parks at Gettysburg maps handy. 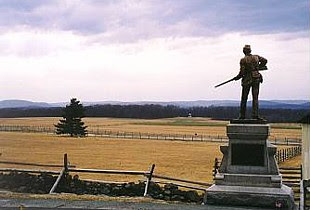 Top Image Source: Brothers' War Relief from the monument to the 12th New Jersey on Cemetery Ridge which depicts one of the Union assaults on the Bliss Farm. Gettysburg National Military Park, Pennsylvania.

Bottom Image Source: Gettysburg NMP Virtual Tour, Day Three The Bliss Farm is across the Emmitsburg Road and below the right foot of the 111th New York monument. Note the tip of the roof of the Brian barn at the right of the monument.
Posted by Rea Andrew Redd at 2:50 PM