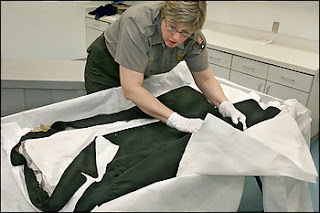 Officials at Ford's Theatre have decided not to put on permanent display the embroidered overcoat Abraham Lincoln wore the night he was assassinated in 1865. The theater, on 10th Street NW, had wanted to exhibit the bloodstained coat in a special protective glass case in the lobby, where it would have been visible through the windows 24 hours a day. The coat, its lining embroidered with the phrase "One Country, One Destiny," was to be a signature element of the theater's renovation and the bicentennial of Lincoln's birth next month.

But some textile conservators expressed concern, saying the coat was too old, too fragile and too famous for long-term display. Officials at the theater, which is in the final stages of a $50 million renovation project, now agree. Paul R. Tetreault, the theater's producing director, said the decision was made to display the coat only from the Feb. 11 reopening until April 15. The original will then go back into storage, and a replica will replace it.

"What we realized is: To have [the coat] on display constantly, 365 days a year, would be problematic," he said. "We were unaware of the various surveys over the years that the coat had actually been deteriorating. So what we decided is, we really don't want to continue to contribute to the deterioration." But "the public has a right" to see such artifacts, he said.

"They own these relics," he said. "The question is, how do you bring them out with the proper conservation and the proper care? And what we determined is . . . we'll display the original coat for the opening of the theater, for the Lincoln bicentennial, up to the anniversary of Lincoln's death, on the 15th of April." It can then be brought from storage for special occasions, he said. Lincoln was shot at the theater by actor John Wilkes Booth the night of April 14 and died the next morning in a boardinghouse across the street.

The theater has been closed since August 2007 for the renovation. Among other things, it is getting new heating and air conditioning systems, seats, stage rigging, dressing rooms and elevators, as well as a new control room, gift shop and conference room. Its grand reopening ceremony is set for Feb. 11. "It's going to be terrific," Tetreault said. "It's really going to be great."