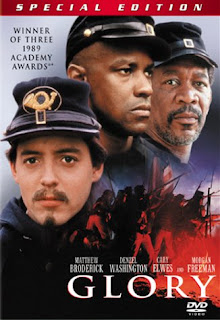 This spring marks the 20th anniversary of my working on a Civil War film, Glory, which was distributed by TriStar pictures. It was a critical success, winning three Oscars(including Denzel Washington's first Academy Award), but only a moderate winner at the box office (because of its focus on a black regiment, the 54th Massachusetts). It sprouted legs on the rental market, however, and many educators took it to their hearts, showing it in part or whole to their history classes.

My involvement with Glory played an important part in my education. I functioned as a minor historical consultant and a troop trainer, schooling black extras in William J. Hardee's _Rifle and Light Infantry Tactics_. I also got to command the movie version of Company E, 54th Massachusetts Volunteer Infantry, in the Fort Wagner assault scenes that serve as the film's climax (my company was the one posted closest to the ocean).

The reconstructed 54th Massachusetts comprised a representative cross-section of black America -- a body of 200 souls that included professional men from the Washington, D.C., area; university students (including thirteen from the University of Central Arkansas, where I taught at the time); first-time offenders from Arizona sent to work on the film as a form of community service; and street people from Savannah. Throw in 300 white reenactors, plus the requisite army of technicians and stuntmen, and the set frequently teemed with chaos and confusion -- especially since the director had never made a military epic before.

I have to admit that Glory turned out far better than I expected. I learned that what the naked eye sees on a set is very different than what a director or cinematopgrapher catcf with the camera lens.

I also learned that film-making is very much a group process. The scriptwriter has his vision, and the director, producer, and stars have theirs. In some ways, the situation resembles serving on an academic committee with people possessing fragle, bloated egos and hair-trigger tempers. On a film set, art often takes second seat to box office considerations. There is a lot of money at stake--especially in a big budget war flick -- and the powers that be are more interested in attracting an audience rather than getting every historical detail right. That means aiming for the heart -- as well as the widespread craving for sensational simulated violence. Hence, I tend to judge historical films in the same way that I judge historical novels. In other words, I am willing to grant these cultural expressions a certain amount of artistic license.

I believe that I could compile as long a list of Glory's historical inaccuracies as anyone on this listserve. Nevertheless, I am still proud of my involvement in that film. Speaking as a historian, I think Glory got 50 percent of the history right. More important, it captured the spirit and much of the experience of the 179,000 African Americans who joined the Union Army during the Civil War. And it presented a compelling story that helped to acquaint millions of people with a moment in American history in which white and black Americans joined together in a brave effort to broaden the frontiers of freedom. 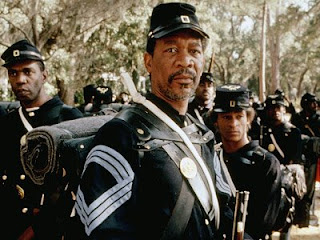 I think those are some of the reasons why Glory has stood the test of time better than films that hewed more closely to the historical record -- such as Zulu Dawn and Touchstone's recent version of The Alamo (an impresssive- looking back but soulless spectacle). In fact, I see a good omen in celebrating the 20th anniversary of _Glory_ in the same year that marks both the bicentennial of Abraham Lincoln's birth and the inauguration of America's first black president. It is yet another case of history being more fascinating than fiction -- a moment of high theater that Hollywood will never be able to duplicate. But for generations to come, historians will be telling our children what it meant to be an American in 2009.

Dear Prof. Urwin, thank you for your post on the significance of remembering history. GLORY truly was a great film and evoked the sense of sacrifice and courage of the time. I'm not even an American and yet, watching the film some 20 years ago, i knew it was something special.

Ti's one of the reasons why i decided to do my first (art) piece in over 10 years as both a tribute to the film's 20th anniversary and it's lasting power and to the art of movie poster illustration.

Feel free to view the 'work in progess' at www.robyamor.wordpress.com

More power to you sir, and thanks,
Roby