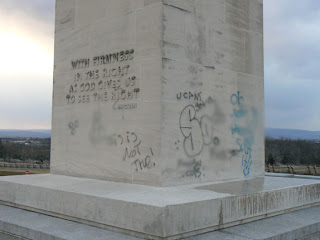 National Park Service investigators are teaming with area police departments to apprehend the vandals that defaced the popular Peace Light Memorial. Gettysburg Police Chief Joe Dougherty confirmed that his agency is working on a lead, but he was unable to release details, since the investigation is ongoing. “We’re working with other police departments to find links and other helpful information,” said Gettysburg National Military Park spokeswoman Katie Lawhon.

The destruction was discovered Jan. 8. Vandals spray painted profanities and obscene images onto the towering monument, located along Mummasburg Road on the Gettysburg Battlefield. “This isn’t just casual graffiti. This is mindless and ignorant,” Park Service Ranger Vic Gavin told WGAL. “It probably took these morons five minutes and five dollars worth of paint, and it’ll take us thousands of dollars to clean it up and restore it.”

The language and symbols are so offensive, that the park covered the graffiti with plywood boards. “Word of this heinous act quickly spread across the veterans community,” Gerry Hawk, Executive Director of the AMVETS Dept. of Pa., wrote in a letter to the editor. “To me, the defacement of the Peace Light further demonstrates a sense of apathy among many Americans when it comes to honoring those who have served.”

Repairs to the Peace Light take precedence over other monuments, given the memorial’s popularity. “It’s definitely at a high-profile location,” said Lawhon. “We have so many monuments to take care of with normal maintenance and preservation, but this moves to the top.” Initially, park officials feared that they didn’t have the equipment to remove the graffiti. Lawhon indicated otherwise Thursday. “I think it’s a matter of power washing. We have that equipment,” she said. “We’ve taken paint and oil off monuments before.” The equipment, however, is uneffective in cold weather, so repairs will have to wait. There is no cost estimate for the repairs. “It’ll definitely be at a cost to the National Park Service,” said Lawhon. 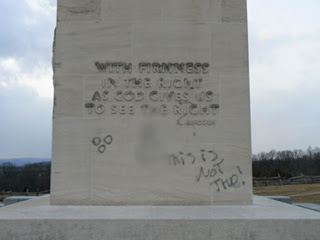 Hawk called upon veterans organizations to subsidize the repairs, possibly through fundraising. “The Park Service estimates that repair costs will be high, but it is our duty to ensure that the Peace Light shines on as a symbol of our national unity, especially in a time of national instability and war,” Hawk said. The $60,000 monument was dedicated July 3, 1938, on the 75th anniversary of the Battle of Gettysburg, representing unity between the the North and South. Dark-colored granite from Maine, a Union state, was used to construct the base of the monument, while the lighter colored shaft is made of Alabama limestone. Alabama was part of the Confederacy. A fire glows eternally atop the monument, symbolizing peace in the United States. The gas-fueled flame has burned continuously for 24 hours a day, aside from the energy crisis in the 1970s, and another period when it was electrified.