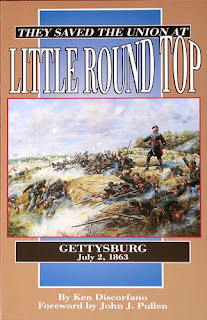 Ken Discorfano in this book expands the popular one word answer to the question 'Who Saved Little Round Top?' Chamberlain plays his part but Discorfano sets Chamberlain and the 20th Maine among the other generals, colonels, and enlisted men who were there that day. Of course, Brigadier General Warren's and Colone Vincent's actions are described; Colonel O'Rourke of the 140th New York plays a major part as does, Colonel Rice of the 44th New York, Private Oliver Norton who was Vincent's bugler,Color Sergeant Andrew Tozier of the 20th Maine, and even Lieutenant Colonel Norval Welch of the 16th Michigan a very small unit that was inadvertently withdrawn during the fight.

The author does not limit his story to the 20th Maine on Little Round Top. The 2nd U.S. Sharpshooters' stands on the Slyder Farm, Big Round Top and Plume Run is viewed a setting up the conditions for the Union success on Little Round Top. Company B is credited with drawing 15th and 44th Alabama regiments away from the assault on the west slope of Little Round Top and up onto Big Round Top. Discorfano speculates that the addition of the two Alabama assault to the Confederate on the 16th Michigan, 44th New York, and 83rd Pennsylvania of Vincent's Brigade may have forced the Federal troops of the little mountain. Discorfano describes Company F as troubling the left flank of the 4th Texas during its assault on the west slope of Little Round Top. Discorfano sees Companies A and E as drawing the 44th and 48th Alabama into an weakened assault on Devil's Den. The author also provide satisfactory evidence that the 15th Alabama's canteens were captured by Company B on the southwest slope of Big Round Top.

To his credit, Discorfano spends a significant amount of space describing the Confederate leadership, enlisted men and their movements as the Army of Northern Virgina attempts to wrestle the Round Tops from the Federal weak grip. Throughout the book, Discorfano supplies primary sources witness' accounts of combat. The maps have a degree of precision and clarity that always mark the work of NPS Ranger John Heiser. The author refreshingly adds antebellum and postbellum descriptions of the major characters and their wives. O'Rourke's wife became a nun; Vincent's child born two months after the battle dies before its first birthday; Tozier marries after the war and he and his wife become domestic servants in Maine. In the final chapter Discorfano summarizes answers to questions such as 'Where did Vincent Fall?', 'Did Welch's 16th Michigan run or retreat in good order?' and 'Why didn't the 15th Alabama get a monument on Little Round Top?' among several other issues.
A quibble: a brief discussion of the monuments on the Round Tops, the Slyder Farm and Plum Run would have been helpful. A slight quibble: John Chamberlain in the text is stated as being a member of the Sanitary Commission and in his picture's caption he stated as being in the Christian Commission. The picture caption is correct.

For CWL They Saved The Union At Little Round Top: Gettysburg July 2, 1863, is essential for both the Gettysburg buff and the Gettysburg Licensed Battlefield Guide exam. A 2008 exam question: What regiment was on the right flank of the 15th Alabama during its assault on Little Round Top? Answer: 47th Alabama. A 2006 exam question: How many monuments does the 20th Maine have on the battlefield and where are the location(s)? Answer: There is one monument on each of the Round Tops.
Posted by Rea Andrew Redd at 1:23 PM

How'd you do on the exam?