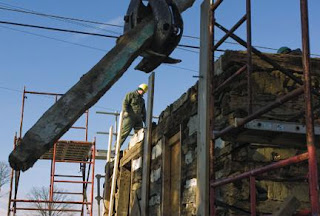 Jeff Miller takes a look at the mess of a structure in front of him and laughs. The 210-year-old William Patterson House - what's left of it - is held together by rocks and mud, a combination called chinking. The rest of the house sits in piles scattered around Miller. Then he composes himself to explain his amusement at the sight. "After about 180 years, you really have to think it's time for new stuff," he said. He's not kidding.
Gettysburg National Military Park crews are working to restore the house, which is located on the Gettysburg battlefield and dates back to 1798. To do that, they are literally disassembling the structure and then rebuilding it. Miller, a carpenter, was overseeing the project Thursday while workers removed rotted logs, tagged them and piled them on the property just a few feet from the shoulder of Taneytown Road. About 40 percent of the logs are rotted and will be replaced with new wood.

But when the structure is re-assembled sometime this spring or summer, it will look almost exactly as it did, Miller said. The work began last summer and will likely take a year to complete because of the challenges associated with restoring such an old structure. "This is one of the most extensive restorations we've done in 10 years," Miller said. 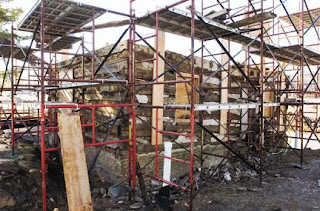 Historians believe the structure was used as a field hospital during the Battle of Gettysburg and the surrounding property was a pasture at the time of the battle. In 1863, William Patterson owned property on the west side of Taneytown Road, which included an orchard and woods. The farmstead was mostly located behind the Union lines, and the westernmost field extended to Cemetery Ridge and was incorporated into the battle lines of the U.S. Second Corps. The remaining fields, in the rear of the battle line, were used as staging areas, headquarters sites, hospital sites and avenues of approach. According to park officials, the building retains a high level of integrity to the historic period it was built in, and there is a high percentage of original material remaining.

The two-story log building was built on a stone foundation and was altered in both the pre- and post-Civil War period. The National Park Service removed non-historic additions to the house in 1982. A modern sprinkler system was also installed in the structure sometime in the last 20 years, Miller said. One of the ongoing restoration project's biggest components was the replacement of the building's foundation, which has already been completed. 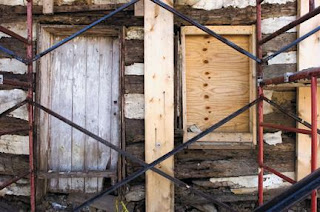 Once all the logs have been removed from the building, the lumber will be inspected and treated. Any rotted logs will be replaced with new lumber that will look nearly exact - down to the ax marks - like the original. Miller estimated about 40 percent of the structure's logs are rotted. But it could be more, he said. "We'll know better when we get them in the shop," he said.

Captions: Top---The last of the logs are lifted off of the second floor of the William Patterson House – the oldest building on the Gettysburg battlefield – along Taneytown Road in Gettysburg on Thursday morning. The National Park Service is working to rehabilitate the house, which dates to 1798. Middle--Parts of the home undergo restoration. Bottom--Scaffolding surrounds the William Patterson House on the Gettysburg battlefield.
Posted by Rea Andrew Redd at 3:39 PM