Everything about the 145th annual Gettysburg Anniversary Battle Re-enactment at Redding Farm in Gettysburg this summer will be big. The event planned for July 4-6, 2008, on Independence Day weekend, is a “once every five-year” large-scale national event.

More than 10,000 re-enactors from across the nation and around the world are already registered, with several more thousand expected. One hundred cannons have been registered since January and more are on a waiting list. At least 400 mounted cavalry will participate. One of the largest and most diverse gatherings of sutlers anywhere will display their historic merchandise for sale. A large living history village and two living history activities tents will provide a multitude of educational opportunities from dawn to dusk.

These combined dynamics mean that both visitors and re-enactors will have a seldom-seen and unique opportunity to experience history on a grand scale in Gettysburg this summer. 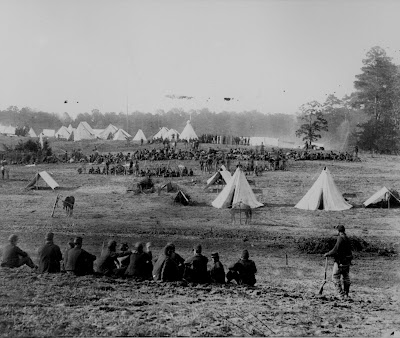 The size of this summer’s re-enactment also required a new and much larger Pickett’s Charge stone- wall at just the right location on the battlefield. The Gettysburg Anniversary Committee staff labored for several months last fall moving 20 dumptruck loads of historic granite fieldstone from a neighboring farm to create the wall. The effort exceeded expectations, resulting in the completion of a 210-yard- long wall with a wonderful historic look. The famous “Angle” has been recreated in the wall’s center.

This year, 1,000 feet of historically reproduced five-rail fence, representing the fence on Emmitsburg Road at the time of the battle, will be placed an actual distance of 873 feet from the “Copse of Trees.” Attacking Confederate troops will cover the same distance from Emmitsburg Road to the wall that they traveled on July 3, 1863, during Pickett’s epic charge. The fence was reproduced by the same lumber mill near Morgantown, W.Va., that produces the fencing for the Gettysburg National Military Park. It was trucked to the re-enactment site this past winter.

In addition to Pickett’s Charge, five other major battles will be recreated during this three-day event. An explosive Independence Day 145th Artillery Salute with all 100 cannons will take place both Saturday and Sunday. Each day, there will be live mortar fire demonstrations and continuous living history programs, which have become a trademark of this event. The Gettysburg 145th National Civil War Battle Reenactment is an all-day family event. It will stimulate the senses and bring history books alive.

“To be both entertained and educated at this unique reenactment is a fabulous way for families to spend Independence Day Weekend celebrating our nation’s history,” said event spokeswoman Andrea Di Martino.

Gates open each day at 8:30 a.m. Complete event information and tickets are available at the official Gettysburg re-enactment Web site, www.gettysbsurgreenactment.com or by calling The Gettysburg Anniversary Committee at 717-338-1525. Tickets should be ordered in advance as grandstand seating normally sells out prior to the event. For information on visiting Gettysburg, please contact the Gettysburg Convention & Visitors Bureau at 800-337-5015 or online at www.gettysburg.travel .

CWL: Yes. It will be awesome. At the age of four, I began reading (photographs and illustrations only) Civil War history. Diaries didn't appeal to me until 1993 when I saw the 130th Gettysburg reenactment and encampment. I began reenacting in November that year and marched in the Remberance Day parade in Gettysburg on the anniversary of Lincoln's Address. In 15 years of reenacting (infantry, medical service, a bit of artillery and now starting signal corps) it is the small events I prefer.

But, the anniversary events like the 145th Gettysburg are one-of-a-kind. There will be a (11th) corps-size group of Union troops and probably two (Third Corps) division-size group of Confederates. That many men under arms and on a dusty road! That