Off Topic Novel: The Prestige 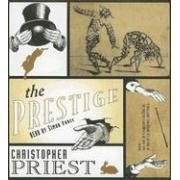 CWL, The Washington Post and Amazon.com agree on this one.

The Washington Post called this "a dizzying magic show of a novel, chock-a-block with all the props of Victorian sensation fiction: seances, multiple narrators, a family curse, doubles, a lost notebook, wraiths, and disembodied spirits; a haunted house, awesome mad-doctor machinery, a mausoleum, and ghoulish horrors; a misunderstood scientist, impossible disappearances; the sins of the fathers visited upon their descendants." Winner of the 1996 World Fantasy Award, The Prestige is even better than that, because unlike many Victorians, Priest writes crisp, unencumbered prose. And anyone who's ever thrilled to the arcing electricity in the "It's alive!" scene in Frankenstein will relish the "special effects" by none other than Nikola Tesla.

Publishers Weekly:
"Priest, one of Granta's Best Young British Novelists (1983 list), has not been overproductive since he made a small reputation with The Affirmation and The Glamour, published here more than a dozen years ago. His new novel (the title of which refers to the residue left after a magician's successful trick) is enthrallingly odd. In a carefully calculated period style that is remarkably akin to that of the late Robertson Davies, Priest writes of a pair of rival magicians in turn-of-the-century London. Each has a winning trick the other craves, but so arcane is the nature of these tricks, so incredibly difficult are they to perform, that they take on a peculiar life of their own?in one case involving a mysterious apparent double identity, in the other a reliance on the ferocious powers unleashed in the early experimental years of electricity. The rivalry of the two men is such that in the end, though both are ashamed of the strength of their feelings of spite and envy, it consumes them both, and affects their respective families for generations. This is a complex tale that must have been extremely difficult to tell in exactly the right sequence, while still maintaining a series of shocks to the very end. Priest has brought it off with great imagination and skill. It's only fair to say, though, that the book's very considerable narrative grip is its principal virtue. The characters and incidents have a decidedly Gothic cast, and only the restraint that marks the story's telling keeps it on the rails."

Library Journal:
"Notions of doubleness pervade this tale of a feud between the families ot two Victorian-era magicians. Alfred Borden and Rupert Angier have spent their careers trying to sabotage one another. When Borden ups the ante by developing a seemingly impossible trick in which he is moved across the stage in a unimaginable short time, Angier responds by enlisting inventor Nikola Tesla to build a turn-of-the-century version of a Star Trek-like transporter. The magicians' story is framed by that of two descendants, affected by the feud in ways they are only beginning to fathom, who meet at the Angier family's desolate country estate. Mixing elements of the psychological novel with fantasy, this is an inventive, if somewhat far-fetched, British neo-Gothic."

AudioFile:
"Priest's remarkable novel won the World Fantasy Award in 1996. Now it's been produced as an audiobook every bit as remarkable. Simon Vance provides the voices of two warring professional stage magicians at the turn of the nineteenth century: Alfred Borden and Rupert Angier. The entire novel is told through journal entries by these two prestidigitators. Hearing Vance mellifluously pronounce words like "prestidigitator" as if they were part of his normal speech makes the book worth the time, but there is so much more. These characters are shrouded in mystery from the very first minutes, and Vance expertly portrays these two men as their lives (and their tricks) are slowly revealed. Winner of AudioFile Earphones Award, 2007 Audies Award Finalist"

CWL: You may have seen the film and enjoyed it; CWL did. So much so, and following the truism that the book is better than the film, CWL found an unabridged reading of The Prestige produced by Blackstone Audio. As much as there is in the film, there is twice as much in the novel. Enjoyment of the book was not diminished by having seen the film. There are additional characters and plot twists. Of course, when the novel introduced Nicholas Tesla, I didn't picture a black and white photo of Tesla but the film's representation of him, David Bowie.
Posted by Rea Andrew Redd at 10:34 AM