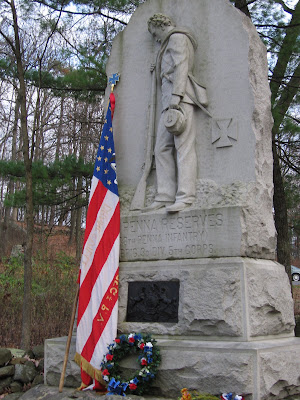 Three hours long, 200+ true and false, multiple choice, matching, short answers, longer answers, a map, photographs of monuments and generals and a grade curve in which anything less than 94% fails. About 125 take the test and about two-thirds have taken it before. Offered every other even year in December. Yes, its the Gettysburg Licensed Battlefield Guide Exam. My first test was in 2006 and my next one will be in 2008. If I recall correctly I missed about forty and got about an 82%; the letter is somewhere closeby.

So, what I am doing for the next one? Starting earlier than I did the first time I took the test. I started in August and took the test in December.

What will I be reading and making flashcards from?

I'll have the history of the park, essential maps, and monument photo books' and Pennsylvania Cable Network's Gettysburg Battlewalks' dvd bibliogrpahica citations posted soon. Today's posting is not being made from my personal library. 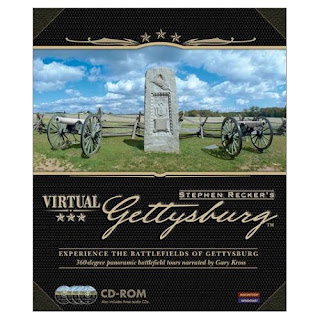 Also, I'll be working with Stephen Recker's Virtual Gettysburg which is the creme de la creme of battlefield tours. Gary Kross is the tour guide and Recker has about 20 360 degree photos of the battlefield. This photos are navigable, which means you can, for example, stand near the McPherson Barn and see Oak Hill, the Willoughby Run hollow, Herbst's Woods, Seminary Ridge, and the borough. Virtual Gettysburg has the most period photographs of the battlefield and the monuments (both at their contruction and current day) than any other format, book/compact disk/wwwsite, that I know of.

What will I be doing with all of this? At the end of March, I'll be in Lynchburg, VA at Liberty University's Gettysburg symposium; the second week in April I'll be in Gettysburg at the GNMP's symposium.Well, I've already read everything once or twice in my life time (I see retirement on the horizon). Gettysburg: A Study in Command--once in high school and once in college, ditto with Catton's Glory Road.

In August 2006, I created flashcards on www.flashcardmachine.com and by December had about 1,000. If you want to look at my flashcards, then email me. Anyone looking for a study buddy?