New On The Personal Bookshelf---Did Lincoln Own Slaves? And Other Frequently Asked Questions 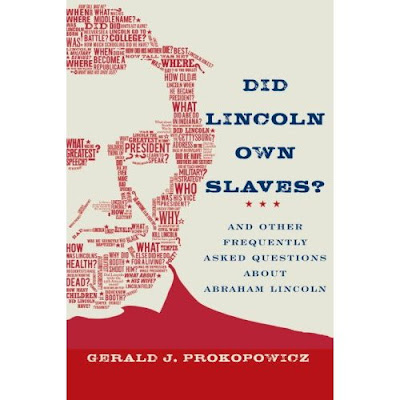 Well, when CWL received a first notice of the book, a stereotype was placed in a mental pidgeon hole. Probably a slim book published for the middle school-high school library. Probably lots of often published photographs. Maybe a 'Dummy's Guide to Abraham Lincoln'. But, there was the author's name: Gerald J. Prokopowicz. CWL is a listener and fan of Civil War Talk Radio and its host and faculty member of East Carolina University. Hmmmm.

CWL placed the book on the release date radar screen and three months later sat down on a bench in Borders Book and Music the week the book arrived on the store's shelves. A half hour on the bench with the book, a Border's gift card, a Borders coupon and about $10 cash went into the decision.

Prokopowicz doesn't write down to the reader of Did Lincoln Own Slaves; it is as if the reader is in a seminar on Lincoln and the author is the the discussion leader and instructor. Aristotle and Socrates would be pleased; Prokopowicz employs questions to bring the reader through the implications of the simplest question. What are the assumptions implied in the questions? How has this question been answered previously? What is the current scholarship on the question?

As scholar-in-residence at the Lincoln Museum of Fort Wayne, Indiana for nine years, Prokopowicz probably had to handle this questions. The book is organized somewhat chronologically but also topically. In the sections 'Boy Lincoln,' 'Rail Splitter,' 'Springfield,' 'Politician,' 'Speaker' and seven other chapters, the author organizes the material in chronological fashion but also explores the implications of the questions and stretches outside the confines of the immediate dates.

In the section 'Speaker' an articulate essay on Stephen Douglas brings the reader into the historical context of competitive politics. The answers to such questions as 'What was his greatest speech?' four pages long and contains a note and portions of Lincoln's remarks. Wonderfully, Prokopowicz conditions his answer with the remark "You already know about his presidential speeches, like the Gettysburg Address and the Second Inaugural Address . . ." and then presents 11 paragraphs of cogent description and discussion of the October 16, 1854 Peoria, Illinois speech addressing the Kansas-Nebraska Act.

Chapter Six, 'President,' Prokopowicz begins with 'How old was Lincoln when he became president?' He deals with the answer in one declarative sentence and then a remark that Lincoln was the third youngest president up to that time. The chapter builds to longer answers in the middle then wind downs to shorter answers. The author leads the reader into an in depth discussion and out again. At the end of the each chapter, a section 'For Further Reading' not only suggests books in the field but also offers a brief historiographical discussion of the resources.

From first to last, the author is not a sage-on-a-stage but a guide-by-the-side. A clear writing style and a concise delivery of the facts presents the reader with an enjoyable experience. A foundation of facts with citations offers the reader a thoughtful and scholarly return on the time invested. Each of the chapters leads the reader to the next; CWL at times could not put it down missed several hours of sleep. Of the many satisfying chapters, 'Legacy' is the most appreciated; Prokopowicz's discussion of the variety of interpretations and the climate of the times in which each interpretation was written, capped 'Did Lincoln Own Slaves?'

With Ferguson's Land of Lincoln in 2007 and Prokopowicz's 'Did Lincoln Own Slaves?, both the general reader of biography and the dedicated reader of Lincoln books will have a Lincoln book in their hands.
Posted by Rea Andrew Redd at 3:18 PM