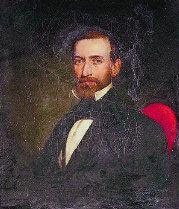 Grime and varnish marred the painting of Gen. William T. Sherman, left. The restored work will be returned to the Sherman museum in Lancaster. Were it not for the sharp eye of a member of the Fairfield Heritage Association, General William Tecumseh Sherman might still be lost after nearly 26 years away from home.

Instead, a rare original portrait of the Civil War general, known affectionately to his troops as "Uncle Billy," will return to the Sherman House Museum, the Sherman family home in Lancaster, in a March 29 ceremony. 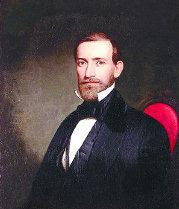 The painting, which is about 150 years old, was among dozens of items, almost all of them connected to Sherman himself, that were stolen from the museum in 1982. The portrait was recovered last fall after a museum volunteer saw it in a Garth Auctions catalog. The Delaware, Ohio, art auctioneer and appraiser listed the selling price at $800 to $1,600, but turned it over to the Ohio Historical Society after learning it was stolen. Where was the painting from 1982 to 2007?

No one knows for sure. The woman who commissioned the painting to Garth Auctions for sale had it for only a short period of time and was unaware that it had been stolen, officials said. Barry Bauman, the Chicago art conservator who spent a month and a half repairing and restoring the painting, said he's pretty certain it was in storage. "The portrait was layered with a dirt and grime film, a slow buildup as if it was in long-term storage," he said. "It was so badly treated in the past. … There was a yellow varnish on it, and the background had been almost completely repainted."

Bauman, who formerly worked for the Art Institute of Chicago, did the work on the Sherman painting free. He figures it was a $10,000 job, although no official value has been placed on the restored work. "The conservator is invisible," he said, "but it's a lot of fun to be behind the scenes." The painting belongs to the Ohio Historical Society, which is giving it back to the Sherman museum. It is not signed and contains no date, but it apparently was painted just before the Civil War.

Laura Bullock, director of the museum, said whoever stole the painting and other items in 1982 did some homework. Only items personally connected with Sherman -- the painting and his chair, for example -- were taken from among hundreds of Civil War artifacts. The painting, although unsigned, is "precious to us," Bullock said. The museum has two other paintings of Sherman, one in military uniform and the other when he was 68, three years before his death.