"I should show those traitors at Richmond . . . that we are not to be transferred like the cattle on the hills or the slaves on their plantations, without our knowledge and consent," wrote a delegate from Ohio County, Virginia upon hearing of the April 1861 secession ordinance. Because of sentiments like this one and due to the fact the Baltimore and Ohio Railroad passed through the northern counties of Virginia, 20,000 Union troops were rushed into the region immediately after the ordinance passed in a May plebiscite.

In the summer skirmishes of Philippi, Rich Mountain and Carnifex Ferry Union troops roughly handled Confederate forces. Within two years, this region would repudiate Virginia secession ordinace and choose to remain in the Union. The Mountain State was offically recognized on June 20, 1863 in a ceremony at Wheeling, which lies about 20 miles from Pennsylvania to the east and the width of the Ohio River from Ohio on the west. Voters who had cast their ballots for Breckinridge in the 1860 presidential election, were soon to be voting in the 1864 election.

The completion of the state's constitution in February 1862 provided for a govenor with a two-year term, established the position of lieutenant governor, withdrew the powers of county courts and gave them to newly formed townships, established an appellate court system, switched to paper ballots from voice ballots in all elections, created three new counties, made Wheeling the state capital, institution a state wide system of education with support for teacher training colleges (normal schools), put a university in Morgantown and a state prison in Moundsville and exluded negroes from the state. The U.S. Congress sent the document back to the assembly, the exclusion clause was removed and the document sent back to the U.S. Congress, which then accepted it. The likely first governor of West Virginia dropped out of the race, when the negroe exclusion clause was removed. 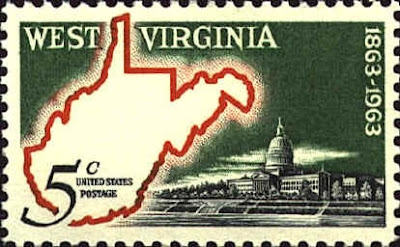 In Washington, D. C. Lincoln and his party relished the forthcoming Republican delegation which Democrats reviewed what the Constitution said about no state being created from a that was already in the Union. Lincoln signed the bill that admitted the new state of West Virginia on December 31, 1862 not quite 24 hours before the Emancipation Proclamation was signed on January 1, 1863. Fifty counties of the Old Dominion, a number greater than the new state's founders imagined, came into the Union. West Virginia's membership in the Union was a mixed blessing for the Republican Party. The citizens of the state were primarily Democrats and validated their memberships in the party in the next several national elections. By 1870, the founders were out of office.

The history of West Virginia, as it was written in the first 125 years, did not speak of the intense political animosities between the Republican founders and the Democratic voters. State history as taught in the Mountaineer school books often deflected, disguised or hid elements of the intense political, social and economic struggles of West Virginia families. The school books attempted to generate pride for a state whose national reputation included stereotypes of hillbillies and mountain dew. The books reported that the creation of West Virginia in 1862-1863 was a product of genuine loyalty to the Union, a devotion to democracy, and the nation as a whole. C. Stuart McGehee, the essay's author, states that "history is not an instrument of patriotic sympathy; it is the effort to study the past to undestand the rpesent and learn lesons that may help prepare for a brighter future."