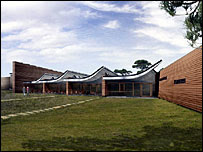 Museums for a key battle of the American Civil War as well as World War I have had an influence on a new battlefield centre at Culloden. The National Trust for Scotland (NTS) is constructing an £8m interpretation centre at the site near Inverness. Trust staff visited In Flanders Field in Belgium and Gettysburg National Military Park in America. They looked at what worked well and any lessons that could be learned from how exhibits and information was displayed. Colin MacConnachie, NTS head of education, revealed the site visits in the latest edition of a magazine for members. The effort was supported by Scottish Heritage USA and National Trust for Scotland Foundation USA. The Battle of Gettysburg during the Civil War had 51,000 casualties.

CWL wonders: Cullodon, Gettysburg, and Flanders. I don't think I've ever seen those names in the same sentence before.
Posted by Rea Andrew Redd at 10:09 AM