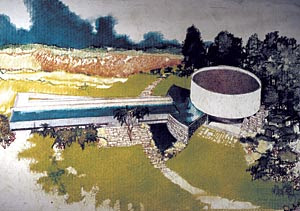 Opened as a visitor center in 1961, the Cyclorama Center was built as part of the Park Service’s Mission 66 program, which erected roughly 100 Modernist visitor centers and hundreds of other tourist buildings between 1956 and 1966. It housed a life-size, narrative oil painting of 1884, by French artist Paul Philippoteaux, depicting the pivotal Civil War battle. Cyclorama paintings are hung in 360-degree circular spaces. The Gettysburg painting’s 27 panels have been restored and will be moved to a new facility.

The Gettysburg National Military Park’s 1999 management plan calls for the removal of the Cyclorama Center as part of the “rehabilitation of major battle action areas, where features on the landscape affected the fighting,” says spokeswoman Katie Lawhon. The park’s period of historical significance runs from 1863 to 1938, she adds, and applies to the battlefield, cemetery, and commemorative elements, including monuments and carriage roads.

Critics contend that the park officials’ approach shows an anti-Modern bias. They note that the master plan retains automobile parking on the spot—a key section of the Union line on Cemetery Ridge, where Pickett’s Charge was turned back—and thus fails to restore the historic acreage. “Their claims about the authenticity of the battlefield are myopic,” says Dion Neutra, one of Neutra’s sons and his former business partner. “They should come to their senses and realize that Cyclorama Center deserves to stay where it was sited by their predecessors. If all else fails, move it to a site nearby.”

Dion Neutra and the Recent Past Preservation Network (RPPN) are suing officials of the Department of the Interior, the National Park Service, and the Gettysburg park in an effort to halt demolition of the Cyclorama’s old home. They allege that officials failed to heed environmental and preservation laws in deciding to raze the 30,000-square-foot building, that they neglected its upkeep, and that officials failed to consider alternative uses for it.

In the meantime, the park is forging ahead on construction of a new, 139,000-square-foot museum and visitor center two thirds of a mile southeast of the Neutra building. Designed by Cooper Robertson & Partners, it is scheduled to open in April 2008. Lawhon says that within a year of its opening, the park will demolish the Cyclorama Center.

The World Monuments Fund included the Cyclorama Center on its 2006 Watch List. Dion Neutra has lobbied vigorously to save it and other remaining examples of his father’s work. His efforts include a petition requesting that President Bush issue a White House pardon for the Gettysburg center—although the tactic’s symbolism is questionable.

“I wouldn’t compare the building to a turkey,” says RPPN president Christine Madrid French, “but, in the sense of forgiving the building’s appearance after such neglect and moving past the bias against Modernism, it works.” The Washington, D.C., federal district court will hear the case in November, according to French.

“I’m just glad my dad didn’t live to experience this,” Neutra says. “The project meant so much to him as an immigrant.” The elder Neutra practiced in his native Austria before emigrating to the United States in 1923.

CWL's view:
Architectural Preservationist says: I wouldn't compare it to a turkey and get over your bias against Modernism.

The architect's son seeks a Presidential pardon for the building.
Doesn't that take the commission of a felony and about a $2 million campaign contribution?

The architect's son views his opponents, the NPS, as being myopic. Of course, he's not myopic about the value of a poured concrete building.

"The architect's son views his opponents, the NPS, as being myopic. Of course, he's not myopic about the value of a poured concrete building."

And the museum that's going to replace it will be made of what -- solid granite and bronze? Hardly. Like every large civic building made today, the new museum for the Gettysburg site is going to be made at least partially of poured concrete.

And you might be surprised to learn that some other poured concrete buildings do indeed have value -- like the Coliseum and Pantheon in Rome, and Hagia Sophia in Istanbul.