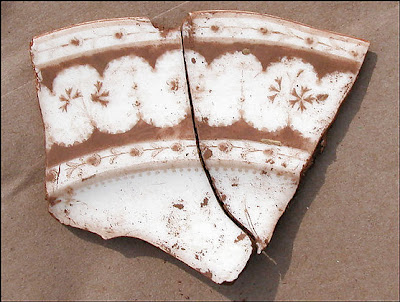 It was just a broken plate found buried in a trash heap. But to researchers at James Madison's estate, Montpelier, fragments of porcelain unearthed last month from the Virginia piedmont tell a story of a first lady, two U.S. presidents, a king and queen and the revolutions that bind their legacies more than 200 years later.

Discovered amid oyster shells, a chamber pot and shards of glass that filled a midden, or trash pile, near Dolley Madison's kitchen, a fractured dessert plate found by researchers during a $24 million restoration of Montpelier is believed to date to the late 1700s and might have once belonged to Marie Antoinette, the French queen with an infamous penchant for decadent living who perished at the guillotine during the French Revolution.

Pieces of a fractured dessert plate are among the artifacts recovered from a trash heap at Montpelier, the estate of President James Madison. The plate's Parisian 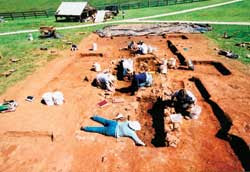 origins have been linked to tantalizing possibilities. (The Montpelier Foundation)
Discussion PolicyDiscussion Policy CLOSEComments that include profanity or personal attacks or other inappropriate comments or material will be removed from the site. Additionally, entries that are unsigned or contain "signatures" by someone other than the actual author will be removed. Finally, we will take steps to block users who violate any of our posting standards, terms of use or privacy policies or any other policies governing this site. Please review the full rules governing commentaries and discussions. You are fully responsible for the content that you post.

The plate -- manufactured by the Parisian company S¿vres, which supplied the court of Louis XVI -- was part of a trove of artifacts uncovered at the Orange County estate, shedding light on the enigmatic personal life of the former president and sponsor of the Bill of Rights. Matthew Reeves, director of archaeology for the Montpelier Foundation, which is conducting the restoration, said that "100 percent of the items we're finding . . . were being used by James and Dolley Madison in their daily lives."

Michael C. Quinn, executive director of the foundation, said, "We have found the mother lode." Quinn said the fact that Madison rarely wrote about himself, the scattering of his belongings after his death and a dearth of correspondence between him and his wife, who were rarely apart, have left little for historians to work with when attempting to piece together day-to-day life at Montpelier. "He never sought the limelight," said Quinn, who noted that Madison, although hailed as "the father of the Constitution" by his peers, insisted that the document was "the work of many heads and many hands."

Absent a comprehensive record of household objects, the foundation has relied in 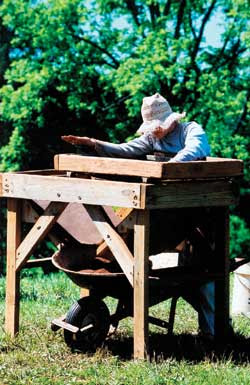 part on oral histories and objects on loan from Madison family descendants, some of which have been authenticated by recent discoveries, foundation officials said. For example, the jagged S¿vres fragments, with their ornate floral pattern faded by the elements and stripped of its gold leaf, perfectly match a plate on loan to Montpelier from Madison family descendants. They say the plate is part of a set that once belonged to Marie Antoinette and that Madison bought from James Monroe in 1803. Historians believe that Monroe, who went on to become president, probably bought the S¿vres plates in Paris between 1794 and 1796, when he was minister to France. The theory is that the plates were sold to Madison to help finance Monroe's trip to France in 1803, when he went back as part of the delegation that negotiated the Louisiana Purchase for President Thomas Jefferson.

"All of a sudden, that heirloom piece is given an incredible amount of validity," Reeves said, because it is now known that it was in use at the estate during Madison's life. Reeves said that further research is needed to confirm the plate belonged to the French queen but that the consistency of the find with the family's oral tradition bodes well for its prospects. The discovery elaborates on Madison's known interest in French culture, Quinn said. The French aided the United States during the Revolutionary War, and Madison hosted the Marquis de Lafayette -- who fought alongside George Washington -- at Montpelier in 1824.

The placement of the midden, about 200 feet from the kitchen, and its contents help explain the way the household was organized, researchers said. Reeves said some of the plantation's 100 slaves probably collected trash and hauled it to the midden periodically. The Madisons' garbage apparently was disposed of separately from the garbage of slaves, given the exclusively high-end items the midden contained. Researchers are searching for a slave midden and hope to find it before the restoration's expected completion in September 2008, foundation spokeswoman Peggy Vaughn said. Other findings, though not as glamorous, further illuminate Madison's daily existence.

A rib bone shows one cut of meat the Madisons ate. Less expensive dinnerware suggests that they saved their best china for special occasions. Remnants of champagne bottles and engraved glassware suggest that Madison had expensive tastes, which, along with stepson John Payne Todd's gambling habit, could have contributed to the debt the estate was left in after Madison's death. The debt led to the sale of many of Montpelier's items. Charred wood fragments -- probably from a fireplace used for cooking -- have been salvaged and can be screened for seeds, eggshells and fish bones to learn more about the Madisons' diet. The findings "are enormously powerful," Quinn said. "They really go directly to one of our most important missions, which is really presenting Madison's personality, his character. 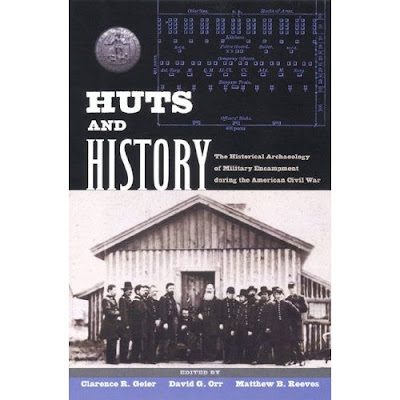 Soon CWL will reveal what archaeologists don't know but relic hunters do, as seen through the eyes of Bryan L. Corel and Joseph F. Balicki, two archaeologists and contributors to Huts and History.
Posted by Rea Andrew Redd at 9:27 AM