News---New Jackson Film : "How I Loved My Slaves and They Loved Me"?

"Still Standing: The Stonewall Jackson Story" is a revealing 48-minute documentary recounting the life and faith of Civil War General Thomas J. "Stonewall" Jackson and will be available this October from Franklin Springs Family Media. Produced and directed by award-winning filmmaker Ken Carpenter, the film is based on the book "Stonewall Jackson: The Black Man's Friend" (Cumberland House Publishing, 2006). The inspirational book is authored by Richard G. Williams Jr. Williams, who also happens to be the film's co-producer and historical consultant.

Through state-of-the-art imagery and expert narrative, "Still Standing" traces the life of Stonewall Jackson, from his orphaned childhood in what is now West Virginia; to the pivotal role he played as Confederate general in the Civil War; to his death at the age of 39 after being killed by friendly fire. The film features striking new footage from Jackson's boyhood home near Weston, W.Va. and a special look at Jackson's Sunday school classes for African-Americans as well as key Civil War battle sites including Manassas, Chancellorsville, Harpers Ferry and others.

In addition to being adapted from such a great book, another outstanding aspect of the film's appeal is award winning director and producer Ken Carpenter's treatment of the subject. After a distinguished career in film, television and music, Carpenter founded Franklin Films in 1994. Carpenter's faith-based work has included projects for Michael W. Smith, Steven Curtis Chapman, Jeremy Camp, Compassion International, DC Talk, and Big Idea Productions, among others. Carpenter comments:

"Richard Williams's book about Jackson's caring efforts to advance the standing of enslaved people reveals a fascinating side of this great American hero—a side we never learned about in history class. The film explores the character that defined this man and I believe it will inspire and challenge audiences to reconsider preconceived notions about a uniquely complex period in American history."

Williams is an award-winning author specializing in Civil War history. A regular contributor to the Washington Times Civil War column, Williams contributes articles about the war to various publications around the country. "Still Standing" will be 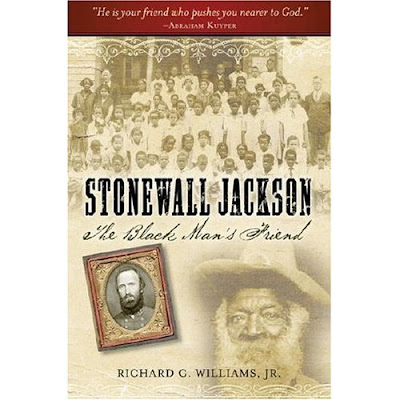 Williams' second documentary project. Past projects include co-producing the award-winning video series, "Institute on the Constitution" with constitutional attorney John Eidsmoe. Williams currently serves on the Board of Trustees for the National Civil War Chaplain's Research Center & Museum Foundation at Liberty University in Lynchburg, VA. His passion for America's Christian history has led him to author three books: "Christian Business Legends", "The Maxims of Robert E. Lee for Young Gentlemen", and most especially "Stonewall Jackson ~ The Black Man's Friend." Please visit his website at SouthRiverBooks.com.

"Still Standing: The Stonewall Jackson Story" will be available at FranklinSprings.com & SouthRiverbooks.com beginning October 1. Williams's book is available at CumberlandHouse.com

View a trailer of "Still Standing: The Stonewall Jackson Story" at www.stonewallfilm.com

For Further Information regarding the documentary, resource FranklinSprings.com or contact Turning Point Media Relations, Inc. at 615-261-1818.

CWL thinks:
1. The book and film are the spawn of two scenes in the film Gods and Generals.
2. The curious should check the index of James I. Robertson's Stonewall, The Man, the Soldier and the Legend.
3. Can the complexity of the slave and master relationship in mid-19th century America be adequately and accurately addressed in a 45 minute film? I doubt it.
Posted by Rea Andrew Redd at 10:21 AM

Good afternoon Mr. Redd. It was nice meeting you at Liberty University's seminar this weekend. I came home was wandering through your blog and am responding to the following:

1. The book and film are the spawn of two scenes in the film Gods and Generals.
2. The curious should check the index of James I. Robertson's Stonewall, The Man, the Soldier and the Legend.
3. Can the complexity of the slave and master relationship in mid-19th century America be adequately and accurately addressed in a 45 minute film? I doubt it.

In response to #1 I can assure that is not true. Gods and Generals had nothing to do with either. I'm not sure why you would post something so devoid of the truth.
#2 The curious, along with the wise, should do that with every book they read.
#3 Agreed, but why would you assume we were trying to do so? You missed the whole point of the film.