News---Appomattox, The Opera: Is it over when the fat generals sing? 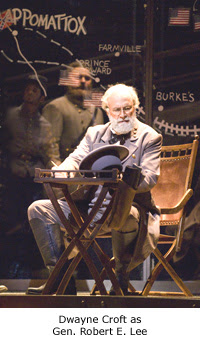 APPOMATTOX is the perfect American Opera. Its story of the surrender of the Confederacy to the Union Army is a cornerstone of American history and an artery of the human experience. The look and feel of our Civil War – its imagery, poetry, politics, rhetoric and music – hovers bright and clear in the currency of campaign speeches, street marches, Supreme Court arguments, week-end sermons, sports and entertainment commentary, sometimes whipping in the breeze from an available flagpole. Composer Philip Glass has produced an amazingly persuasive vocal score that sits comfortably in the operatic column – inviting and compelling to all. The musical structures and vocal lines are all at once familiar in the ear, strident in the heart, close and intimate in the collective memory.
APPOMATTOX, the Opera is a series of iconic tableaux. Mr. Glass has teamed with librettist Christopher Hampton (Oscar Winner, DANGEROUS LIAISONS; Tony Winner, SUNSET BOULEVARD) to create both psychic tension for unseen battles and reports of thousands of soldiers suddenly slaughtered to the disturbing on-stage realities of dead horses strung-up for food and a child shot during an evacuation. A scene with blood-red lighting by designer Christopher Akerlind evokes the horror of blood-soaked earth, another approaching dawn – and memories of the famous crossroads scene in “Gone With The Wind”. Likewise, fashions created by Gabriel Berry are as rich and smooth as those of MGM period designer Walter Plunkett. 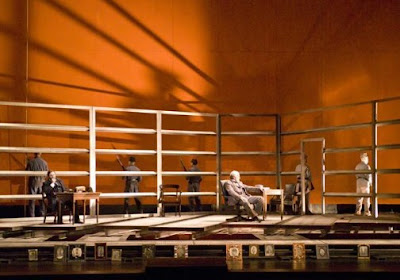 CWL Reflects: I saw my first reenactment in the summer of 1993 in Gettysburg and I saw the film Gettysburg about six times in the course of six months during 1993 and 1994. I became a Civil War reenactor in late 1993. Will the next generation of CW reenactors say, "I saw Philip Glass' Appomattox and after that I started wearing wool in July" ?
Posted by Rea Andrew Redd at 2:13 PM