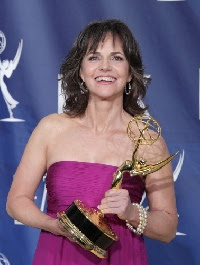 Actress Sally Field is all set to play Mary Todd Lincoln in Steven Spielberg's long-gestating biopic ‘Lincoln’. The film will be based on historian Doris Kearns Goodwin's ‘Team of Rivals: The Political Genius of Abraham Lincoln’.

According to Hollywood Reporter, the movie may focus on the 16th US president's role in leading the North in the Civil War. The newspaper also reported that Liam Neeson has been signed to play Lincoln in the movie. Earlier, it was being speculated that Marcia Gay Harden could bag the character of Lincoln's wife.

Tony Kushner is writing the screenplay for the DreamWorks project. Spielberg will focus his attention to ‘Lincoln’ once he completes ‘Indiana Jones and the Kingdom of the Crystal Skull’.

CWL's Idle Speculation: Part 'War Room', part 'Schindlers' List' and the first half hour of 'Saving Private Ryan'. Spielberg, having produced 'Amistad', shows that he is in touch with spirit of the times.
Posted by Rea Andrew Redd at 10:46 AM