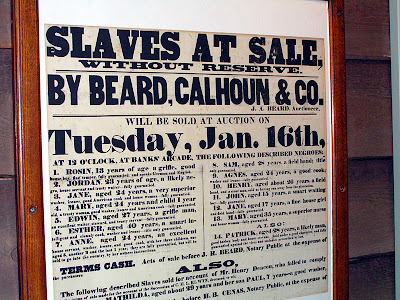 On Tuesday, May 22, 2007, the Supreme Court of the United States docketed a petition filed by Deadria Farmer-Paellmann -- the descendant of Africans enslaved in South Carolina -- asking the Court to hear a case against 17 major financial institutions for their role in financing, underwriting and supporting slavery. At issue is whether statues of limitations should be tolled to permit slave descendants to bring actions for restitution against the corporations that allegedly earned profits enslaving Africans in violation of Northern antislavery laws. The case is entitled, Farmer-Paellmann v. Brown & Williamson, No. 06-1533. The defendants in the action include: FleetBoston Financial Corporation, Aetna Inc., JP Morgan Chase Manhattan Bank, New York Life Insurance Co., Lehman Bros, AIG, and Brown Brothers Harriman.

"It is a pivotal moment for African Americans and all people, and we believe the Court should hear the case, said Bruce Afran, counsel for Farmer-Paellmann. Co-counsel Carl Mayer added,"the issues presented are unique and are important in settling a long running injustice."

Farmer-Paellmann originally filed the landmark case on March 26, 2002. It was consolidated with 8 similar actions in the Northern District Federal Court in Chicago, IL in 2003. The consolidated action was dismissed with prejudice by judge Charles Norgle on July 6, 2005. Plaintiffs appealed the case in the 7th Circuit Court of Appeals, one of the most pro-business circuits in the country, and secured an unprecedented victory. In the Decision, written by Judge Posner, the Appeals Court ruled in favor of half the case consisting of consumer fraud and fraud claims. It held that companies that lie about their role in slavery are guilty of fraud. However, they affirmed the lower Court ruling that former slaves should have brought their own claims against the companies and therefore, the plaintiffs are not the proper parties to bring the case.

"It was impossible for slaves or ex-slaves to bring this action. No one knew anything about these companies until 2000," said Farmer-Paellmann. It was in January of 2000 that Farmer-Paellmann initiated an effort to identify the names of specific companies that played a role in slavery and asked that they apologize and pay reparations. Prior to that time, books written on the history of slavery never identified any of the defendants as participants in slavery. However, the Appeals Court suggested that books written prior to the 2002 action should have been enough for former slaves to bring their own actions.

Adding to the absence of information identifying the defendants as slave profiteers is the fact that many of the defendants continue to deny that they played a role in slavery. Farmer-Paellmann argues in her petition, "most dastardly were the public false statements made by representatives of the JP Morgan Chase Bank denying, as late as March 5, 2004, that they were at all involved in slavery." Months later, after threat of loosing lucrative vending contracts with the City of Chicago, the bank filed a report admitting to their role in slavery.

"That we had a victory in the Appeals Court renewed my faith in the justice system. I am optimistic that the Supreme Court will hear our case and give us a chance to secure justice," said Farmer-Paellmann.

The court petition has been published to support the litigation by the non-profit Restitution Study Group with additional writings and can be purchased at: www.cafepress.com/rsgincorp.

Source: http://www.rsgincorp.com and e-mail:: rsgincorp@yahoo.com
Posted by Rea Andrew Redd at 10:58 AM