CWL---Moving the Target Closer to the Archer: From Montgomery to Richmond 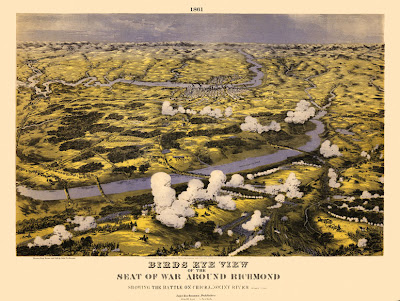 The secession movement was, for the most part, an uncoordinated event. If the 'Slave Power Conspiracy' existed, then the winter of 1860-1861 is the most apparent manifestation of the conspiracy. Outside interference in the matters of the states, both real and alleged, was the primary cause of the political actions taken in December 1860 and the early months of 1861. Secession leaders din not plan or coordinate the withdrawal from the Union and had not held "any serious discussion on whether or not to unify themselves afterward." (pp. 113-114)

On February 4, 1861, acting upon a invitation from South Carolina, the seceding states met at Montgomery, Alabama. Six states attended and within a week created a provisional constitution and chose Jefferson Davis as provisional president. Politicians and newspaper editors speculated for the next sixty days on the secession of Virginia, Maryland and Kentucky. If Maryland and Virginia removed themselves from the Union, then would Washington, D.C. become the capital of the confederated states?

The day after the first day of the confederation convention, February 5, a South Carolinian wrote to a Virginia senator that if Virginia secedes then the state will "have all things exactly as she wants them, including the capital." On April 17, was President Davis and Vice President Stephens were meeting, they were interrupted by the news that Virginia had seceded; basing his opinion on this news Davis told Stephens that the war was over before it had begun (pp. 115-117).

Promptly, Davis dispatched Stephens to Richmond. Reaching the Virginia state capital on April 22, Stephens met with Governor Letcher and the next day Stephens met, behind closed doors, with the state's secession convention. Stephens strongly encouraged the Virginia secession convention to adopt a treaty with the new Confederacy, adopted the Confederacy's provisional constitution and apply for statehood in the Confederacy. Stephens suggested the possibility that "if such an alliance is made . . . the seat of our government will, within a few weeks, be moved to this place." Stephens reiterated the remarks on April 23. His rationale, with which he hoped the Virginians agreed, was that the Yankee army would soon be knocking on Richmond doors and Virginians would be better off to have Confederate Army troops to help the Virginia militia greet the mudsill horde. (pp. 117-118)

Confederate strategy, at this point required a defensible border, and the Potomac River would make a fine one if Maryland chose to stay in the Union. By moving the Confederate capital to Richmond, Davis and the provisional Confederate congress understood that they were moving the target closer to the archer, but, there were advantages to be gained: Richmond and Petersburg were communication hubs for the railroad and the telegraph, and centers for manufacturing. It was taken for granted by Confederate strategists that the region east of the Appalachians and the Mississippi River provided the best pathways for Yankee invasions of Dixie. On the 25th the Virginia secession convention adopted the treaty and within a few minutes a Virginia delegate put forth a resolution that Virginia request the Confederation government move to Richmond. (pp. 118-119)

The Virginia secession convention did not readily endorse the resolution. A southwestern delegate attempted to have the resolution tabled. Another southwestern delegate declared it unseemly that Virginia would rush from secession, into the Confederacy and become its capital; it appeared to be a rush for political spoils and sullied the reputation and honor of the delegates. Other delegates spoke in favor of the resolution. Hadn't Stephens offered, in so many words, the capital to Virginia? Didn't Virginia need the resources of the Confederacy to withstand the expected military assaults that would soon come?

Objections to the resolution continued: Virginians had not ratified the Ordinance of secession; yes that was expected but not until May. But if it failed and the Confederate capital was already in Richmond? A vote was taken and the resolution passed 63 to 13; but there were enough absent members that the total number of voters did not constitute a quorum. Another vote was taken the next day; it was 76 to 16 in favor of the resolution. All of this was done behind closed doors and when the resolution was announced, the citizens of Richmond gave it mixed reviews as did many hard-core secessionists who were making their quarters that month in Montgomery Alabama. (pp. 119-121)

Alabama secessionists did not want to give up the capital and told Davis that he was elected the president of the Confederacy and not of Virginia. Georgian secessionists viewed Virginian secessionists as coming late to the party and bringing a lot of make-peace moderates to the government. The treaty between Virginia and the provisional Confederate Congress was ratified on May 6 and the next day Virginia was admitted to the Confederate States of America. Virginia's Governor Letcher had the reputation, among provisional Confederate congressman, as being an obstructionist and a drunk. In May, the new Confederate Virginia senators and representatives arrived in Montgomery and joined Davis, Stephens and their cabinet in lobbying for the removal of the government offices to Richmond. On May 11, a resolution was placed before the Confederate congress to adjourned on May 23 and reconvene on July 20 in Richmond, or wherever else provisional president designated. This resolution passed May 13; the resolution was sent to the Judiciary Committee which passed it on May 15 and placed it on Davis' desk for a signature.

Hardcore secessionists newspaper editors stated that the move to Richmond was only a partial step, that the real goal was to take the CSA to Washington and then seek a compromise and readmission into the Union. Davis surprised all when he returned the bill unsigned to the committee. The bill moved the President and the Congress to Richmond and left the judiciary and all else in Montgomery. (pp. 123-124)

A debate continued as Arkansas seceded from the Union and sent delegates to Montgomery. A vote came on May 20. Arkansas, Georgia, Texas and Virginia voted in favor of removing the government to Richmond; Alabama, Florida, Mississippi, and South Carolina voted against it. Louisiana's delegation split on the issue. Congress adjourned at 2:00pm and set a time in the evening to reconvene. Many delegates began to travel to Atlanta for trains to their home states. That evening with the absence of two of the three Florida delegates, and a one vote change from Louisiana and second vote was taken and the resolution passed 6 states to 3 states with the actual count of the delegates 24 to 20. By the thinnest of margins the Confederate capital was moved from Alabama to Virginia on May 20th 1861. Jefferson Davis was on a train heading north on May 26 and arrived in Richmond on May 29.