CWL----Combined Operations, Dysfunctional Personalities and Generals Who Know How To Fight 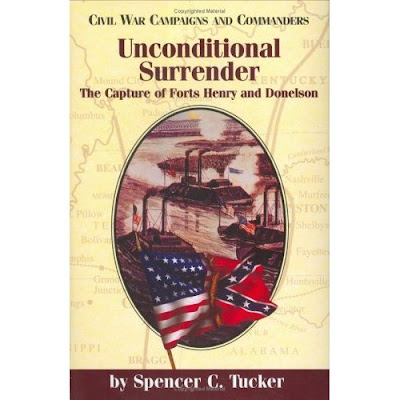 Tucker’s Unconditional Surrender is a short, solid and satisfying introduction to the war in Kentucky and Tennessee during the fall of 1861 and the beginning of 1862. Its refreshing to find a good map on the second page of a first chapter. A map of the Western Theatre with railroads, rivers and cities introduces the strategic considerations of Halleck, Johnston, Polk and Grant. At the end of the chapter another map with all the railroads, rivers and cities of the Confederacy are presented along with the Confederate Line of Defense in the Winter of 1861-1862. Each of the generals are sketched in sidebars the this chapter which sets the stage.

Emphasizing the riverine warfare , Tucker states that the ‘control of the west’s great rivers, the Mississippi, the Ohio, the Tennessee, and the Cumberland, was vital to both sides in the war.” This vitality becomes apparent as he describes the efforts of McClellan, Halleck, Grant, and Andrew Hull Foote to put together an inland fleet. New to the reader is Andrew Hull Foote, who is often mentioned in brief elsewhere. Both he and Don Carlos Buell are sketched by the author in sidebars. Foote’s career is truly remarkable: son of a U.S. senator, former student but not a graduate of the naval academy, convert to Christianity, executive officer of the Philadelphia Naval Asylum, commander of a ship that chased slave smugglers between Africa and the U.S., commander of a ship that landed marines in China and destroyed four forts in 1856. His industriousness in building a fleet that would capture Forts Henry and Donelson, Island No. 10, Nashville and Memphis in the first 5 months of 1862 is outstanding.

Tucker is careful in his descriptions of ‘timberclads’, and river-class iron gunboats and of the floating navy yards at which the ships were built and maintained. With carpenters and iron workers who had great experience in building steamships but little or no experience in building ironclads, Foote agitated locally, regionally and nationality those who had to contribute to the effort. McClellan, Fremont, Halleck, Buell and Gustavaus V. Fox (under-secretary of the navy) were lobbied for resources and funds by Foote. 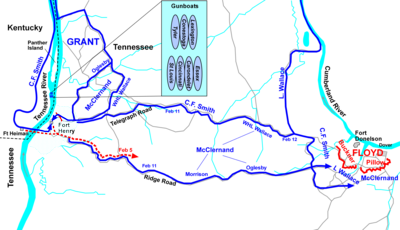 Fort Henry on the east bank of the Tennessee and Fort Donelson on the west bank of the Cumberland were constructed on the Kentucky-Tennessee border by CSA general Lloyd Tilghman in the late fall and early winter of 1861. Fort Henry’s location was prone to flooding and after the arrival of troops under the command of Grant and the river fleet under Foote, it was evacuated and the CSA troops marched to Donelson. Grant drew his commanders together and all agreed that a quick advance on Donelson was appropriate.

The reader is struck with the resemblance of the Fort Donelson battlefield and the Shiloh battlefield, which would be fought in 60 days. On a ridge over looking a river, with flooded creeks and ravines on its flanks a once beaten army regards its foe. In February the CSA army is on the ridge, in April the USA army is on the ridge. Fortunately for Grant in both instances the CSA commanders exercise either to much tactical authority and too little strategic. The Confederate breakout of Donelson is successful until, Pillow and Floyd flinch and lose heart. The night after the breakout and retreat Pillow resigns the command of the fort to Floyd. Floyd promptly resigns the command and passes it on to Bruckner, who is wise enough to surrender the fort the next day as both Pillow and Floyd are floating in small boats and trying to escape capture. As in the battle Shiloh, it is Forrest who refuses inactivity and works an aggressive type of small unit warfare which both allows his troops to escape and twist the tail of the Union lion.

The consequences of Grant’s campaign includes the first great victory and his reputation as someone who knows how to fight and envied by Halleck. The CSA suffers a crisis of strategy. The retreat and concentration of Confederate forces and the Battle of Shiloh is a direct result of their loss of Forts Henry and Donelson. Indeed, Tucker points out that the 12,000 to 15,000 lost troops and the 40 pieces of lost artillery likely made a significant difference in the Battle of Shiloh in April.

Tucker and the McWhiney Foundation Press have produced a brief but rewarding discussion of the campaign, its commanders and its significance. The maps are clear, the biographical sidebars are informative and describe the personalities in command. This book is recommended for buffs and those unfamiliar with the war in the West. It is suitable for both high school and undergraduate academic libraries as well as public libraries. 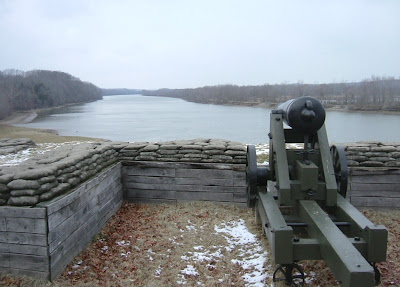