Other Voices---Portion of the 16th Maine's Battle Flag Comes Home; Last Seen In One Piece on July 1, 1863 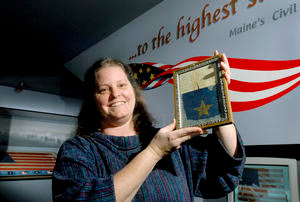 Laurie LaBar of the Maine State Museum displays a rare fragment of the 16th Maine Regiment’s Civil War flag. With their capture imminent during the Battle of Gettysburg, 16th Maine soldiers tore up their flag and hid the pieces to keep their banner out of Confederate hands.

A small but invaluable piece of the state's history came home Monday when the Maine State Museum acquired a remnant of a Civil War flag that the 16th Maine Regiment carried into battle at Gettysburg on July 1, 1863. The ragged bit of dark blue silk, emblazoned with a lone golden star, is less than 5 inches long. It was once part of a flag that, at 6 feet, may well have been taller than many of the soldiers who fought under it.

But the size of the seemingly unimposing scrap of cloth does not detract from its value. Quite the opposite: The fragment is valuable precisely because it is just that. With their capture imminent on the first day of the Battle of Gettysburg, the men of the 16th Maine tore up their "colors," as Civil War flags were known. They hid the pieces of two flags in their clothing to prevent advancing Confederates from capturing the banners.

The state museum had three of those remnants in its collection until Monday, when a piece that the museum bought at auction ast month finally arrived. Carefully preserved in a glass-covered wooden frame, the remnant has a handwritten note attached to it that says John Palmer of Winslow, a soldier in the 16th Maine, gave it to his father. John Palmer is believed to have been captured at Gettysburg on July 1, 1863, and imprisoned in Richmond, Va. He apparently was released from prison, and either sent or delivered the fragment to his father before being killed in battle in February 1865.

The note that accompanied the fragment, written in a flowing script on paper that is now faded and torn, reads: "A piece of the flag of the Sixteen Maine Regiment. Tore up on the field of Gettysburg to keep it from the hands of the rebels. Presented to
Ambrose H. Palmer by his son John Palmer after his liberation from Richmond." 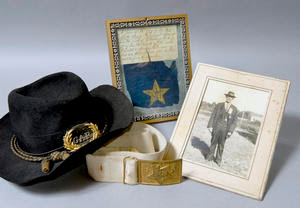 What happened to the fragment in the years that followed is unclear, but the state museum bought it and three related Civil War artifacts for $3,680 from Cowan's, an auction firm in Cincinnati. The collection includes a black felt hat and an off-white cotton belt, both bearing the insignia of the Grand Army of the Republic, a Union veterans group. It also includes a photograph of an elderly man in a three-piece suit wearing what appears to be the hat from the auction lot. The man in the photo is believed to be Ambrose Palmer Jr., John Palmer's older brother and a fellow member of Company B in the 16th Maine Regiment. Unlike John Palmer, Ambrose Palmer Jr. survived the war and, judging by his photograph, lived a long ife.

Laurie LaBar, the chief curator of history and decorative arts at the museum, said Tuesday that two people who track auctions of Civil War artifacts notified the state museum when they learned that Cowan's planned to sell the Maine items. The museum put in the winning bid but it does not know who put the items up for auction. Contacted Tuesday, Amy Francis, a staffer at Cowan's, said the auction house could not release that information. LaBar said the fragment is an important acquisition because what happened to the 16th Maine Regiment at Gettysburg is as compelling, in its own way, as the more celebrated exploits of the 20th Maine Regiment at Gettysburg.

Led by Col. Joshua Chamberlain, the 20th Maine prevented the Confederates from capturing a hill called Little Round Top on the second day of the three-day battle. Little Round Top marked the left flank of the Union line at Gettysburg, and some historians say the 20th Maine's success there may have prevented rebel troops from overrunning the entire Union force that day. The 16th Maine fell to the Confederates on another part of the battlefield the day before, when it was attacked from two sides. Historians say the 16th Maine fought valiantly, but its soldiers turned their attention to saving their beloved flags when they realized that defeat was inevitable. 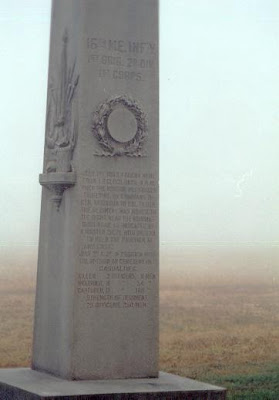 Like other Union regiments, the 16th Maine carried an American flag and a regimental flag, known collectively as "the colors." "For a few last moments our little regiment defended angrily its hopeless challenge, but it was useless to fight longer," Abner Small of the 16th Maine wrote after the battle. "We looked at our colors, and our faces burned. We must not surrender those symbols of our pride and our faith." The regiment's color bearers "appealed to the colonel," Small wrote, "and with his consent they tore the flags from the staves and ripped the silk into shreds; and our officers and men that were near took each a shred."

No one knows how many pieces of either flag remain, and museum officials aren't sure which flag included the remnant that they received on Monday. That was the 16th Maine's "greatest day," wrote Earl Hess, a history professor at Lincoln Memorial University in Tennessee, in an introduction to a collection of Small's Civil War letters published in 2000. Hess said Tuesday that the 16th Maine's actions show that battle flags carried "very, very deep symbolism for Civil War soldiers,"representing the "esprit de corps" of a regiment and "a larger entity -- the country, the cause."

"It was such an important battle and this is a very compelling story within that battle," LaBar said. "Having two Maine regiments involved in very different ways at Gettysburg sort of bookends the whole war for me." The 20th Maine Regiment "turned the tide" at Gettysburg, LaBar said, but the 16th Maine's determination to keep its cherished banners out of enemy hands "is every bit as important as Little Round Top in helping us understand the Civil War." 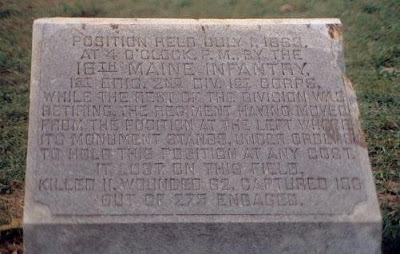 CWL---The 16th Maine fought north of the Chambersburg Pike and south of the Eternal Peace Light Memorial. There is the unit monument immediately north of the pike and the destruction of the flag marker immediately south of the pike. For more on the 16th Maine at Gettysburg go to: http://www.virtualgettysburg.com/exhibit/monuments/pages/sr110.html and
http://www.maine.gov/sos/arc/edu/turner/tcw.htm
Posted by Rea Andrew Redd at 1:36 PM

A small but invaluable piece of the state's history came home Monday when the Maine State Museum acquired a remnant of a Civil War flag that the 16th Maine Regiment carried into battle at Gettysburg on July 1, 1863.
----------------------
Linc