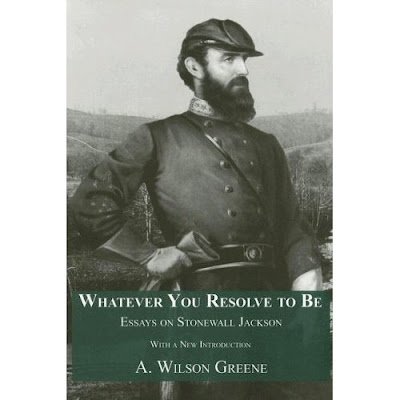 Whatever You Resolve To Be: Essays on Stonewall Jackson, A. Wilson Greene, University of Tennessee Press, 2005, 186pp., b/w illustrations, maps, index, paperback, $19.95.

I have the luxury of ordering inter-library loans and having them delivered to my desk. I frequently request a new book and read a few chapters before I order it for myself. Having encountered A. Wilson Greene's recent history of Civil War era Petersburg, Virginia and appreciating it, I requested an inter-library loan of Whatever You Resolve To Be. I read Robertson's biography of Stonewall Jackson when it came out in 1997 and decided I had covered Jackson thoroughly. I thought I would spend two hours on Greene's 2005 update of his 1991 work and send it back the same week I received it. Upon reading the Preface to the 2005 edition, I ordered a copy from AmazonZshops; it was $10.61 and that included $3.99 for shipping.

What convinced me to own the book was the preface to the 2005 edition; the 36 page review of Jackson studies from 1991 to 2005 is clear, concise and complete. Robertson's 1997 biography took its place at the center of Jackson studies. The understanding of Jackson which the public held from 1991 through 1996 is brief and illustrated by the author's effort to rename the Jackson Shrine, where 'The Arm' is buried to the Stonewall Jackson Shrine. The change was necessary in order to inform Andrew Jackson, Reggie Jackson, and Michael Jackson fans to keep moving on.

Robertson's conclusions regarding Jackson, Ron Maxwell's interpretations of them in Gods and Generals and those writers whose biographies found 'different Jackson's' are presented in an intriguing fashion by Greene. In a nutshell, much of Maxwell's Jackson behavior is plausible, if undocumented according to Robertson. Relying on his own understanding of Jackson, Greene sees Maxwell's Jackson as acting politically correct towards blacks but not necessarily historically accurate in 1862. Although, 'a more accurate Jackson emerged when Maxwell took his story to Moss Neck in the winter of 1863.' The films depiction of the May 1863 death are historically accurate. (xxxvi-xxxviii)

Other Jackson scholars produced efforts since the appearance of the Robertson biography. Byron Farwell's interpretation of Jackson 'judged Jackson more harshly that did his predecessors and his interpretations conflict with Vandiver, Henderson and Chambers pre-1960 and Centennial era biographies. Like Farwell, Paul Casdorph takes the biographies of that era to task for imagining from primary sources instead of letting the sources speak. Of course, some of those primary sources do romanticize Jackson. So, what is an historian to do with a host of mishandled primary sources that have thoroughly entered the popular culture in the course of 140 years? 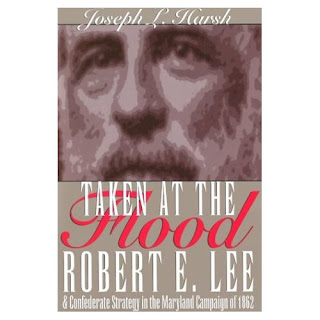 Hot topics in Jackson studies in the last decade have been the Jackson-Lee relationship. In the past 20 years, Lee has had his detractors and their writings have fed the interpretation of Jackson. Some writers see Jackson as the stronger partner in the relationship. Also, the Lost Cause school of interpretation has handled primary sources in such a way that may have tilted the interpretation of the partnership in favor of Lee. Greene looks to Peter Carmichael's work as addressing the issue of Gettysburg without Jackson and the writings of Henry Kyd Douglas, staff officier of the Army of Norhern Virginia. Ethan Rafuse's work on First Manassas receives high marks for putting the battle within the context of the 1861 mentality of the generals. The major works on the 1862 Valley Campaign are reviewed with the work of Saurer, Tanner, Ecelbarger and Krick being favorably appreciated. Sears and Burton on the Peninsula Campaign, Krick on Cedar Mountain, Hennessey on Second Manassas. The Battle of Chantilly/Ox Hill received two studies, both of which are well researched and written notes Greene. Contested terrain, the Sharpsburg Campaign, is covered by Sears, Harsh and Hearn; each contributes different understandings of Jackson's efforts in the campaign. 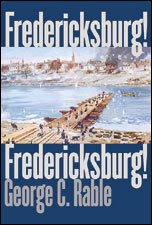 Conflicting studies address Tom Jackson and his health issues; the mid-19th century context of health is reviewed and the stereotype of Jackson the hypochondriac is rejected. Jackson's education, his maxims, and his teaching style are reviewed in separate scholarly articles. All of these works prompted Greene to review with five essays, written in the late 1980s and early 1990s. He sets forth 12 pages of agreements and disagreements with the literature he reviews in his 2005 preface.
It was on the strength of this 2005 preface/essay that I purchased the book. In particular I am looking forward to the Fredericksburg essay in which he addresses the breakthrough of Meade's Division of Jackson's lines on December 13th. 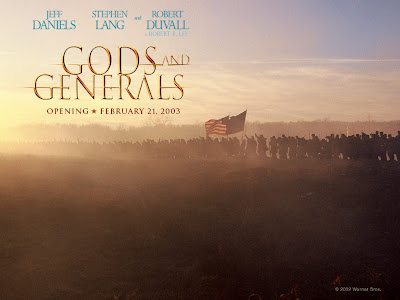