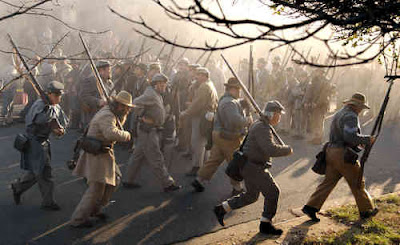 Sprigs of boxwood shrubbery were tucked into the caps of Civil War re-enactors gathered at the city dock yesterday morning. The sprigs were worn by actual Union soldiers more than 140 years ago--chosen for the green color to compliment the North's own Irish Brigade.

National Park Service historian and author Frank O'Reilly led a tour of about 125 people, in addition to some re-enactors, through the streets of Fredericksburg yesterday afternoon, recounting the brigade's hellish trip from the Rappahannock River to the front lines at Marye's Heights. Throughout the weekend, battle re-enactments played out on city streets along with living-history camps and other historical tours. The next five days mark the 145th anniversary of the Battle of Fredericksburg, fought Dec. 11-15, 1862.

For two hours, O'Reilly's group made their way from Sophia Street to the Kirkland Memorial on Sunken Road. The National Park Service held an anniversary ceremony for the Battle of Fredericksburg at the memorial site. O'Reilly read historical accounts of the brigade's arduous trip, recounting how soldiers from New York, Pennsylvania and Massachusetts had to watch and listen to their compatriots die as they made their way to the front.

Despite low morale and heavy artillery fire coming at them, members of the brigade tried to keep it light. O'Reilly recounted one tale of a general who was grazed by a bullet, only to joke with his men about what had happened. "Only the Irish can laugh in the face of what is coming," O'Reilly said.

O'Reilly said 565 men in the brigade were killed, wounded or went missing in a battle that "destroyed troops physically but elevated them spiritually." "Today the military considers ten percent lost a disaster," O'Reilly told the crowd. "The Irish Brigade lost almost fifty percent." Those who followed O'Reilly's lead braved the brisk 50 degree weather, overcast skies and misty conditions. Ann Marie Keech, of Newport News, came for a weekend of Civil War events and described the park service walk as "you-are-there type of history." She described herself as a little bit of a Civil War buff.

"They paint the picture for you, so if you want to get into it you can," Keech said of the Park Service tour and the re-enactors. "When I close my eyes I'm not sleeping, I'm visualizing." Michael Beard, of Stafford County, said he went from 10 a.m. to 10 p.m. on Saturday, taking in various historic events. Beard, like his friend Keech, didn't mind the weather, which was similar to what Civil War soldiers encountered so many years ago--minus a sky darkened by gun smoke from Union and Confederate forces. "It's more realistic because this is the weather they had."