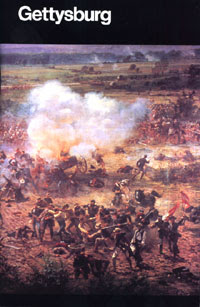 Congress intends to give another $3.8 million to Gettysburg National Military Park to finish the Cyclorama painting restoration — even though National Park Service leaders testified before federal legislators that no taxpayer money would be needed to fund the project. The painting restoration is part of a comprehensive $125 million effort undertaken by the park and its non profit partner, the Gettysburg Foundation, to build a new Civil War museum and visitor center along the Baltimore Pike, demolish the antiquated facilities currently positioned near the Taneytown Road, and restore that area to its 1863 Battle of Gettysburg appearance.

“Thanks to the generosity and entrepreneurial spirit of private sector partners, the National Park Service can accomplish this (project) at no cost to the taxpayers,” former NPS Deputy Director Denis Galvin testified before Congress in a Feb. 1999 hearing. The total federal spending on the restoration of artist Paul Philippoteaux’s painting of Pickett’s Charge, with the additional $3.8 million, now stands at $15.7 million. “Galvin testified under oath that they did not need, and wouldn’t accept, taxpayer funds,” said Franklin Silbey, a private consultant and historic preservationist.

“Here you have a total of $16 million in public money that is being spent, or has been spent, for this picture restoration. Has there ever been an audit on how this money has been spent?” Investigators from the Government Accountability Office visited the Gettysburg Battlefield earlier this month to see if fund-raising efforts by the Gettysburg Foundation are compliant with government standards, but the agency’s findings won’t be made public for several months. 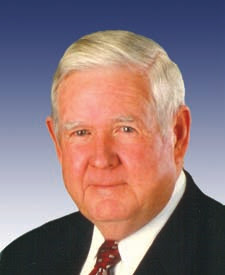 “Maybe there is finally some oversight to this project, because it’s long overdue,” said Steinwehr Avenue business owner Eric Uberman. The House Appropriations Committee and U.S. Rep. John Murtha, R-Pa., of Johnstown, were behind Congress’ $3.8 million allocation. Murtha was recently given a tour of the battlefield by park and Gettysburg Foundation officials.

“He wanted to know how much more money was needed to finish the Cyclorama painting restoration. The Gettysburg Foundation told him $3.8 million,” GNMP spokeswoman Katie Lawhon said regarding the 1884 artwork. “Congressman Murtha has been a longstanding supporter of the project.” When GNMP and what was then the Gettysburg National Battlefield Museum Foundation united several years ago, the alliance was branded as an ideal private-public partnership, with NPS leaders claiming that they could accomplish the project fundraising goal — then an estimated $40 million — without acquiring state or federal funds. Project officials maintain that they’ve never asked for the tax monies.

“We want to make it clear that Congress has made these decisions,” Gettysburg Foundation spokeswoman Dru Anne Neil said. The Gettysburg Foundation has collected more than $30 million in taxpayer dollars to cover project costs. In addition to the Congressional money, state coffers have pledged about $20 million to fund the Baltimore Pike visitor center and museum construction. “It’s all been their choice,” Neil explained. “We’ve never asked for the money.”

During the Congressional hearings in 1999, when federal legislators contemplated whether to back the Gettysburg project, lawmakers were skeptical of the park’s claim that all of the funds could be raised without acquiring public monies. “I always hear these pie in the sky ideas of a park… then what happens is they turn around and ask us for (the money),” Subcommittee on National Parks and Public Lands Chairman James Hansen told Galvin. “Now give me a straight answer. Do you really think you can raise this money?” 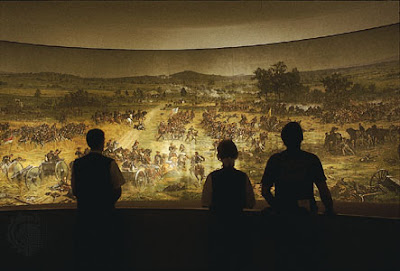 At the time, the estimate for the facility and the acquisition of the land was $40.4 million. Park officials thought $22 million could be raised through grants and nonprofit fundraising, and the remaining costs would be covered by a non-recourse commercial loan. “Yes,” Galvin replied to Hansen’s inquiry. “And it seems to me if we can protect Gettysburg National Military Park without spending taxpayer dollars, that means $40 million is going to go someplace (else) in the system and do some good… and I don’t see frankly why we wouldn’t pursue it.”

According to recent press announcements, the Gettysburg Foundation has now raised more than $95 million, with one-third of that total being public monies, and a portion of that sum being loans. The Gettysburg Foundation plans to use the $3.8 million to install and hang the artwork’s 27 individual panels within the new gallery, fabricate related exhibits, and install exhibit lighting. Slightly more than $11 million has already been spent to doctor the 377-foot long, 27-foot high painting. Originally, the project was budgeted to cost $1 million.

“This project is the first of its kind ever undertaken in North America,” Neil said. “No one really knew exactly what it would cost.” For years, the painting hung within the present-day Cyclorama building, erected in 1962 along the Taneytown Road beside the current park visitor center. But both facilities have become antiquated — the visitor center building was built in 1921 and was actually a private dwelling — and fires, floods and roof leaks have damaged the once tear-inducing painting. Complicating matters is another key factor: the visitor facility is sized to accommodate 450,000 people a year, but handles about 1.5 million tourists annually.

When the new 139,000 square-foot visitor center opens in April, and the adjoining Cyclorama building opens in the fall, the park plans to raze the current facilities. But the demolition probably won’t occur until 2009-2010. The land was the scene of the high water mark struggle between the Union and Confederate armies on the third day of the Battle of Gettysburg.

“It’s a ground-breaking project. It’s never been done before,” Lawhon said regarding the $125 million price-tag. “The whole scale has gone up and the costs have gone up as well.” The $3.8 million being given by Congress, Gettysburg Foundation officials assert, are the last funds needed to pay for the artwork project. The allocation is marked on the federal spending plan in a specific fashion: “complete Cyclorama restoration.”

“Every year, committees come up here to visit and see where we are on the project,” Neil said regarding the construction effort that began 24 months ago. “They asked us what we needed, and that ($3.8 million) was the number we gave them.”