CWL---12th GNMP Seminar "The Fate Of A Nation: The Third Day at Gettysburg 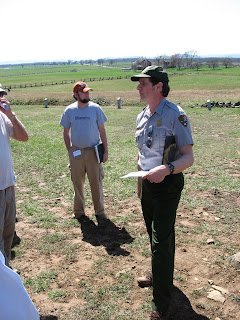 John Latschar---Welcome: There are striking similarities between the Gettysburg Campaign and the 1968 Tet Offensive in Vietnam

Jen Murray---Pickett's Charge: Typical or Untypical Frontal Assault? The six mistakes by Lee at Malvern Hill were repeated by Lee at Cemetery Hill.

Friday: 2.5 hours
Matt Atkinson: Lee Views the Assault
Scott Hartwig: Heroes, Myth and Memory at the High Water Mark
Three major Confederate generals who participated in the assualt said in the 1880s that Cemetery Hill was the objective. Ziegler's Grove was cut down immediately after the battle; John Batchelder mistook The Copse of Trees which had added ten feet of height in the 20 years since the battle for Ziegler's Grove.
Tim Orr: Skirmishing on July 3rd: The Deadly Game
Tom Holbrook: Brilliant and Successful?: The Fight on East Cavalry Field 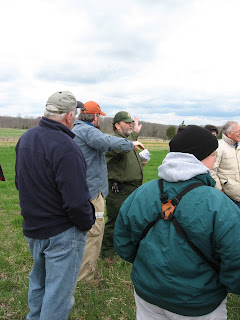 Sunday: 2.5 hours
Chuck Teague: The Right Gone Awry---Pickett's Vulnerable Right FlankThe three events which caused the Charge to go awry:
1. Federal artillery overshoots hit Kemper's brigade causing an early mis-alignment in the ranks and files
2. Confederate artillery running out of ammunition and the misplacement of a battery that was to advance with Kemper's brigade.
3. The Confederate 'guide right' and 'close left' commands, to cover for killed and wounded that dropped out from the Federal artillery barrage ordered by McGilvary, pushed the ranks and files to the left thereby missing the gap in the Federal line that existed between McGilvary's battery and the Vermont brigade.
Chuck Fennell: The Hellish Fight at Culp's Hill
Karlton Smith: Alexander Hays, The Blue Birds and the Union Defense at the Salient
Troy Harman: George Meade: Cut-and-Run or Counter-Offensive.

Hello. This post is likeable, and your blog is very interesting, congratulations :-). I will add in my blogroll =). If possible gives a last there on my blog, it is about the Notebook, I hope you enjoy. The address is http://notebooks-brasil.blogspot.com. A hug.