New---True Sons of the Republic: Europeans Fighting for the Union 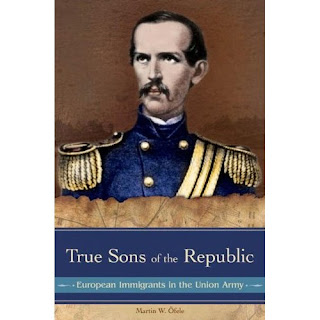 Up to 500,000 Union soldiers, or one fourth of the Union army, had been born in Europe. These immigrants had left their home countries for a multitude of reasons, mostly economic and political. In the United States, they envisioned a country of freedom that would allow them to pursue their goals of acquiring wealth and participating in politics. Soon immersed in the great debate over the expansion of slavery, many immigrants found themselves forced to take sides and eventually rallied around the Union flag. Ethnic Americans joined the Northern army out of the same motivations as their native-born comrades, with one notable difference. By defending the Union, immigrant volunteers hoped to tear down nativist obstruction against their assimilation into society and prove their worth as full citizens.

Declaring their unconditional loyalty, several groups entered into veritable competitions to raise separate regiments that would defend not only the Union but ethnic and national pride. Through their high visibility within the army, those units became synonymous with the ethnic war effort. The conduct of noticeable organizations such as the Irish Brigade or the partly German Eleventh Army Corps shaped public notions of immigrant participation in the war for decades to come, notwithstanding the fact that the large majority of foreign-born soldiers served in mixed and predominantly native American regiments. These new Americans contributed substantially to Union victory.

Martin W. Ofele has taught history at the Universities of Leipzig and Munich. He is the author of several publications on the Civil War Era in Germany.

CWL: True Sons of the Republic: European Immigrants in the Union Army by Martin W. Öfele is the second in the series 'Reflections on the Civil War Era' from Praeger/Greenwood Publishing and was released in February. Decision in the Heartland: The Civil War in the West, the first in the series, was released in January and Weary of War: Life on the Confederate Home Front by Joe A. Mobley is the third and released in March.
Posted by Rea Andrew Redd at 10:47 AM