GNMP New Visitor Center: How The NYT Reports It And Thoughts From CWL's First Visit 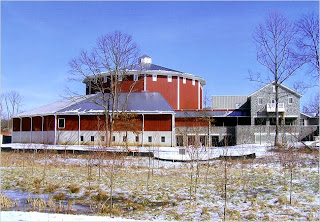 At Gettysburg, Farther From the Battle but Closer to History, Dave Caldwell, New York Times, March 12, 2008

The old visitor center and museum at the Gettysburg National Military Park was cramped, obsolete and a little too close to history. The brick building, built in the 1920s as a private home, was part of a complex that sat where Union lines had stood for the last two days of the most famous battle in the Civil War. Nearly 1,000 Union soldiers were killed, wounded or captured on the hallowed ground beneath the complex. Wayne E. Motts, a local historian who has been a licensed battlefield guide for 21 years, was not the only person who was bothered by this fact.

“I’ve said if I could go down there and tear down that building with my bare hands, I would,” said Mr. Motts, the executive director of the Adams County Historical Society, which is in Gettysburg, Pa. Luckily, he will be saved the trouble. The complex is being razed, and the land will be restored to how it looked in July 1863. Meanwhile, a $103 million visitor center and museum will open April 14 less than a mile away — on a plot of land, archaeologists have confirmed, where no fighting occurred.

Park workers and Civil War buffs have been waiting for decades for the opening of the new center and the debut on Sept. 26 of the restored 377-foot circular “Battle of Gettysburg” mural, which was completed in 1884 by the French painter Paul Philippoteaux and 20 other artists. The new museum has been designed so that its galleries of artifacts will give visitors a better historical context for what really happened when Union and Confederate soldiers clashed in the rolling farmland of south-central Pennsylvania 145 years ago.

“Our objective is to compel people to get out on the battlefield,” said John A. Latschar, the park superintendent since 1994. “If people come to the museum but don’t go on the battlefield, we will have failed.” Dr. Latschar, who has worked for the National Park Service for 30 years, and Robert C. Wilburn, the president of the Gettysburg Foundation, think they have built an enlightening museum for Gettysburg’s 1.7 million annual visitors. Gettysburg, 85 miles north of Washington and 200 miles southwest of New York, is a superb day trip; Dr. Latschar said the average visit lasted about eight hours. The new center and museum will encourage people to stay longer, perhaps overnight. He has told park rangers to anticipate deeper questions about the battle.

“The current museum that we’ve been living with all these years doesn’t tell our visitors anything about anything that means anything, period,” Dr. Latschar said. “It’s what you’d call a collection.” The museum still includes artifacts, including a portable wooden desk thought to have been used by Gen. Robert E. Lee; a sapling crutch made by George Kistler, a wounded Union soldier from Pennsylvania; and a doctor’s journal that listed the location of several thousand Confederate dead. A short film, “A New Birth of Freedom,” aims to immerse visitors in the battle and lay out its place in history.

Interspersed among the artifacts are interactive stations and exhibitions that Dr. Latschar said, half in jest, will finally take the museum experience into the 21st century. The exhibitions do not back away or sanitize the fact that nearly 8,000 Union and Confederate soldiers died at Gettysburg. Of the approximate 165,000 troops who fought in or near the town, more than 46,000 were killed, wounded, captured or went missing. One wall has 500 photographs of soldiers who became casualties.

“There are places where it’s really brought home,” Mr. Wilburn of the foundation said. “We don’t try to pull any punches. We want people to understand how terrible the war was in that regard.” Mr. Motts said, “If it is remembered like that, hopefully, people will make decisions that don’t have to lead to that point.” The center and museum combined consist of 24,000 square feet of exhibition space, as well as a Refreshment Saloon, serving some of the same foods popular in the 1860s, like Virginia ham and apple pie. The building has been equipped with a climate-controlled storage space for 300,000 objects and 700,000 archival materials.

The building, which resembles a combination farmhouse and barn, is located roughly in the middle of the “fish hook,” the shape of the Union Army’s defensive formation during the battle. It has also been built on lower ground, so that it is not visible from most of the battlefield and, unlike the old one, will not block the view. “But I think it’s going to markedly increase interest in the Battle of Gettysburg and markedly increase interest in the American Civil War,” Mr. Motts said. “I think the new museum will bring out a host of new stories.”

Thoughts From CWL's First Visit:
On SA evening in the new museum, while walking into the (small room) film on the legacy of the battle I overheard someone walking out asking "What's Martin Luther King got to do with the Battle of Gettysburg?"

First thoughts on first visit:
1. I saw every cent of $103 million.
2. At times I stood in awe; the intersection of story and technology is very impressive.
3. This is not the mother-of-all-Battle of Gettysburg bookshops. It's a museum/visitors center store with candles, but a nice musuem/visitor center store on par with the Colonial Williamsburg (VA) or the Biltmore Mansion (Ashville, NC) gift shops.
Posted by Rea Andrew Redd at 11:01 AM