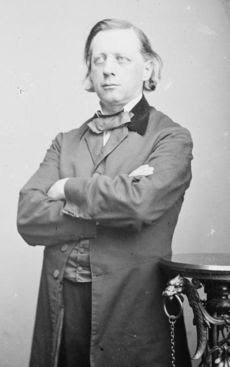 Speech at the ceremonial rising of the U.S. flag at Fort Sumter, Charleston SC, April 14, 1865.

"The soil has drunk blood and is glutted; millions mourn for millions slain . . . .
Towns and villages have been razed; fruitful fields have been turned to wilderness. It came to pass, as the prophet said: 'The sun was turned to darkness and the moon to blood'.

"We have shown by all that we have suffered in war how great is our estimate of the importance of the southern States to this Union, and we will honor that estimate now in peace by still greater exertions for their rebuilding."

"Those who refuse education to the black man whould turn the South into a vast poorhouse, and labor into a pendulum incessantly vibrating between poverty and indolence."