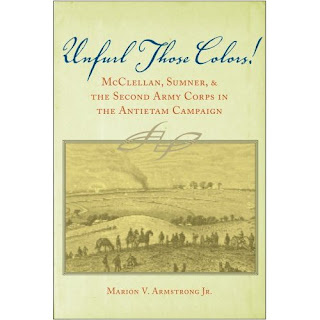 Unfurl Those Colors! examines the operational fabric of leadership
and command in the Army of the Potomac during one of the most critical campaigns and battles of the Civil War. The Battle of Antietam remains “the bloodiest single day of combat in American history” with over 5,000 killed, 20,000 wounded, and 3,000 missing. Many eminent Civil War historians consider it the turning point of the war.

As a result of the perceived Federal success at Antietam, Abraham Lincoln was able to issue the Emancipation Proclamation to make the war about ending slavery and terminating any hope of European recognition for the South. This book constitutes an operational study of the Army of the Potomac during this campaign and battle, carefully documenting the command decisions of army commander George B. McClellan and following the execution of those decisions through the corps level of command and down to the ordinary soldier in the Second Army Corps.

It reappraises the leadership and decisions of Edwin V. Sumner during the battle of Antietam as the one federal corps commander who was steadfast in carrying out McClellan’s plan of battle and effectively directed the battle on the Federal right. It details as no previous account has the fighting of the Second Army Corps at Antietam to include Sedgwick’s division in the West Woods and French’s and Richardson’s divisions at Bloody Lane.

"Unfurl Those Colors! is a very important contribution to the field of Civil War and military history. While a number of significant books have been written on the Battle of Antietam and the Maryland Campaign, none have narrowed down a particular phase as this book does.” states Ted Alexander, Chief Historian at Antietam National Battlefield Park and a Smithsonian Associates tour guide specializing in Civil War sites.

CWL: It seems Antietam/Sharpsburg is having a good year when it comes to publishers' attention. The Maryland Campaign of September 1862: Ezra A. Carman's Definitive Study of the Union and Confederate Armies at Antietam by Joseph Pierro arrived on the bookstore shelves in late March and now Unfurl Those Colors is upon us. The summer reading stack is getting tall!
Posted by Rea Andrew Redd at 11:22 AM

Labels: Army of the Potomac, Battle of Antietam, Battle of Sharpsburg, McClellan, Sumner