CWL---Simple Story of a Soldier Intrigues and Awaits Further Research 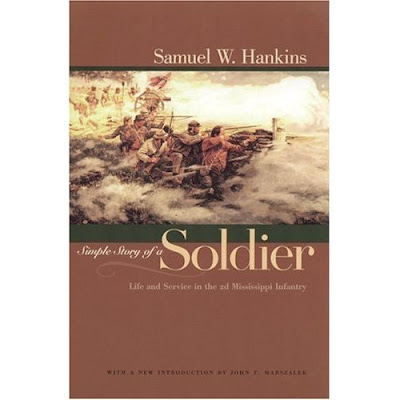 Drill was impossible for some in the 2nd Mississippi; they did not know their right from their left. Hankins describes his train ride to Virginia while riding atop the cars and his encounters with tunnels. Ordered to Jackson's small army, the 2nd Mississippi occupied Harpers Ferry, drilled, bought pieces of rope that had been used to hang John Brown and engaged in gambling. Nothing is mentioned of moving the locomotives down the Valley Pike but the soldiers' narrow eye view of the battle of Manassas is given.

Hankins neglects telling events from July 1861 to April 1862, at which point the 'war begins in earnest.' The soldiers are very soggy. One has a premonition of death. An artillery piece fires at a balloon; the ropes are cut and the balloonist falls to his death. In 1902, while in Corinth finds a former Union soldier who also witnessed the balloonist's fall. The 2nd Mississipi' place at Malvern Hill is in support of the artillery.

The battle of Sharpsburg comes and passes quickly. Hankins describes the Suffolk campaign as it was lived by the privates. Soaked uniforms, lousy clothes, rotting shoes, despicable food. Hankins relates that he was a half an hour from freezing to death while on picket duty; two of his comrades sling him between themselves and force him to walk. He recovers slightly. Readers will painfully accept the conditions of the winter of 1862-1863 and wonder how the 17-year old ever made it through.

Gettysburg comes quickly in the memoir; Hankins is wounded in the foot at the Railroad Cut and to captured. For the reader, the details of this event are very descriptive. Shipped to NYC, then to Fortress Monroe, then to City Point, Virginia, Hankins is exchanged and sent to Mississippi to recuperate. He does and joins other wounded veterans in forming a partisan band of cavalry who roam Mississippi and Alabama in search of a Confederate army to join. They are skilled in staying out of Yankee hands and avoiding combat altogether. The trek nearly destroys their horses and fortunately, a doctor locates a still and reinvigorated the flagging bodies and spirits of the troop.

The Mississippi cavalry battalion takes part in a portion of the Atlanta campaign and then is ordered to Mississippi, back to Alabama, and then back to Mississippi. Learning of the news of Lee's surrender, the unit disbands.

Though meager in the amount of detailed descriptions Harkins offers, those episodes he covers are expressive and from the privates point of view. The captain is the most important man in the memoir. Hankins never meets a general. His personal experience is at the center of this book and rewards the reader. Yet, Marszalek only introduces the pamphlet; there are no notes or annotations in the book. Hankins' memoir awaits a graduate student's efforts. An explanation of the 2nd Mississippi's role and conduct at Manassas and Glendale would be helpful. Hankins' reporting of the death of the balloonist is minimal. Medical care and the lack thereof is important in the memoir and needs to be expanded. The partisan cavalry battalions of Mississippi need to be explained. CWL enjoyed reading Hankins' memoir but wishes to have a fuller picture the privates, corporals, sergeants and captains of the 2nd Mississippi. Long Live Bell Irwin Wiley!
Posted by Rea Andrew Redd at 10:28 PM