News: Army of the Potomac's Winter Huts Location To Be Preserved 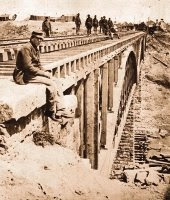 Central Stafford County needs a public park, historians and preservationists say, but not of the usual kind. This one, set atop ridges overlooking Accokeek Creek, would feature the most significant remaining set of unprotected Civil War forts and camps in the northern part of Virginia. That's what they recommended yesterday to area officials meeting at the University of Mary Washington's graduate-studies center in Hartwood.

County Administrator Anthony Romanello convened the ad-hoc group, which included Stafford supervisors, archaeologists, historians, planners, private citizens, and officials from the public utility that runs the regional landfill where the historic sites are located. To protect the sites as the landfill grows, the R-Board--or Rappahannock Regional Solid Waste Management Board--intends to preserve 14 to 20 acres of the 760-acre facility.

"The important thing is to convey this land unimpaired for our children--that's the first priority," said John Hennessy, chief historian of Fredericksburg and Spotsylvania National Military Park. "The R-Board has done a great thing by setting this property aside." In January, R-Board members voted unanimously to reshape an 80-acre landfill expansion, giving up 3 to 5 acres, to preserve one of the forts, R-Board Superintendent Andrew J. Mikel said. The other forts and winter camps sit on land nearer the creek, where environmental rules preclude landfill development.

Many participants in yesterday's meeting favored creating a park on the property so the public can see and appreciate the Civil War and 18th-century sites, which include four Union Army forts and two camps where soldiers spent the winter of 1862-63. Supervisor Paul Milde, whose Aquia District includes the tract, strongly supports the park concept.

The idea was first proposed two years ago by Friends of Stafford Civil War Sites, a private group that has worked with builders and county officials to protect and memorialize other Union sites in eastern Stafford. FSCWS made supervisors and planning commissioners aware of the Civil War sites in 2006, presenting a 100-page report on them and urging that they be preserved as a park with a one-lane, one-way road to provide access for visitors. Officials were asked to keep the information confidential to help save the sites, which are little known to the general public but have been dug by relic hunters since the 1950s.

Having waited two years for officials to act, FSCWS is now "impatient" to see the sites made into a park, said Glenn Trimmer, the group's director. Trimmer said the tract is the best surviving piece of the "Valley Forge of the Civil War," the winter camps where the Union Army recovered from its defeats at Fredericksburg and Chancellorsville and in the humiliating "Mud March," and gained the strength to fight again.

"You've got to remember," he said, "soldiers left these camps and went straight to Gettysburg. If they hadn't kept this army intact, and gotten it well trained and well drilled here, Gettysburg would have been a defeat." Author and University of Richmond instructor John W. Mountcastle and Stafford historian Al Conner urged Stafford, Fredericksburg and the R-Board officials to work quickly so the public can enjoy the sites during the Civil War's 150th anniversary, which begins in 2011. Mountcastle said the park could be a boon to regional tourism, much like two Civil War redoubts that Williamsburg saved and opened as a park last year during Jamestown's 400th anniversary.

The forts were built to defend against a feared attack by Confederate cavalry, Schamel-Gonzalez said. A network of such earthworks protected the Union encampments in Stafford, home to at least 120,000 troops, and the army's bustling supply depot at Aquia Landing on the Potomac River. Hennessy and others urged that the sites be put on the National Register of Historic Places, to attest to their importance and help preserve them.

Romanello, county Historical Commission Chairwoman Anita Dodd and others said it's imperative to do more archaeology on the whole tract to make sure officials know what historic sites--including Indian and Colonial ones--might be there. At Romanello's suggestion, the principals agreed to form a small study group to hammer out the details of archaeology, preservation and park development. In the meantime, Mikel warned that the historic area, which is posted, is being patrolled by the county Sheriff's Office. Trespassers will be arrested, he said.

Segments from reports by Dovetail Cultural Resource Group and the Friends of Stafford Civil War Sites:

The proposed park tract in central Stafford features 12 archaeological sites, including: FORT 1: This two-faced, 248-foot-long Union Army battery has two gun platforms that may have held 3-inch ordnance rifles or 12-pound Napoleons. At its center is a square, 9-foot-deep supply pit or blockhouse. The fort area includes a zigzag trench and rifle pits.

FORT 2: This three-faced, 210-foot-long battery would have had four or five cannon.

FORT 3: This three-faced battery, which may have held six guns, included a heavily built blockhouse with below-ground storage for powder and shell.

FORT 4: Originally about 200 feet long, this earthwork has been damaged by logging.


WINTER CAMPS: A picket post and two dug-in winter camps, which had log shelters with fireplaces for the soldiers, neighbor the forts. One camp has what is believed to be an officers' quarters made of sandstone.

CORDUROY ROAD: Part of the area's wartime road network included a corduroy road built of logs so the Army of the Potomac could move wagons and heavy guns through boggy areas. Part of one such road, built of pine logs, is perfectly preserved in one swampy site.

BRIDGE ABUTMENTS: Sandstone abutments survive from a bridge that crossed a creek for a well-preserved 18th-century road that was a major route for the Union Army's 11th Corps.

QUARRIES: Two late 18th-century sandstone quarries, one of which appears to have later become a mill, speak to Stafford's role as a provider of building stone. Cut stone was put on skids and pulled by oxen or horse, or loaded onto shallow scows and taken downstream on Accokeek Creek. (The quarry at Government Island, on Aquia Creek, provided sandstone for the White House and the U.S. Capitol.)