News---The Opera's Not Over Until John Brown Swings 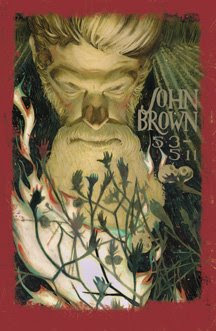 On May 3, The Lyric Opera - Kansas City presents the world premier of the opera "John Brown," which promises to "bring to life" Brown's career in Kansas and other events in his tumultuous life. Other scheduled performances are May 5, 7, 9 and 11.

In 1854 Congress passed the Kansas-Nebraska Act which provided that the question of slavery in those territories was to be decided by their residents. This precipitated a proto-civil war between North and South, both sides sending men and money to Kansas to swing the balance of national power. The South was in control of the federal government; it feared that abolition of slavery in the new states would mean the end of its power. Nearest to Kansas was Missouri, a slave state; in the first territorial elections, thousands of armed men from the South crossed the border, terrorized election officials, stuffed the ballot boxes and "elected" a pro-slavery Kansas government which immediately enacted repressive laws: anti-slavery sentiments were punishable by prison sentences or death. This territorial government was given official sanction in Washington.

Invaders from the South are threatening the free-state settlers of Lawrence, Kansas. Martha and her brother Tom, both pacifists, try to persuade her fiancé, John Brown's son, Oliver, to leave town with them, but he refuses. The leader of the settlers, Robinson, and the pro-slavery Governor both want to avoid conflict, but each is opposed in his own camp: Robinson by the abolitionist John Brown, the Governor by the blood-thirsty Sheriff. When Lt. Jeb Stuart arrives without the troops the Governor had requested, the Governor crosses the river to sign a peace treaty with Robinson. Stuart, a proud Southerner, overhears John Brown describing the evils of slavery. This leads to a heated confrontation, with Stuart's slave caught in the middle. Alone with the slave, Brown tells how, like Moses, he has been chosen by God to lead the slaves to freedom. Robinson and the Governor return and are about to sign an evasive treaty, but Brown and the settlers suspect that they are being sold out to the slavery side. At the height of renewed conflict, Tom's body is brought in. Martha tells how he was murdered by the invaders. Her anguish brings about reconciliation. The treaty is signed while Brown warns, "This is but the prelude to disaster."

On their homestead in eastern Kansas, Brown's family and friends sing a spiritual with a slave whose family Brown rescued. Brown and Oliver bring news that an army of Southerners has entered Kansas, swearing to kill the Browns and all other abolitionists. These invaders are being helped by Brown's slave-trading neighbors on Pottawatomie Creek. Martha, still distraught over her brother's death, comes to say goodbye. Oliver convinces her to stay, to believe in the power of love. Frederick Douglass, the great black leader, comes to visit his old friend Brown, who reveals his plan to use the Southern Allegheny Mountains as a base for an attack on slavery. He then persuades Douglass to give a speech. Some of Brown's Southern neighbors burst in, assisted by U. S. troops under Lt. Stuart, looking for an escaped slave. Thinking Douglass was the fugitive, the neighbors beat and tie him. Douglass proves his innocence, but Stuart supervises the burning of the Browns' outlawed books. Brown leads Douglass away; when he returns a messenger comes with news that war had begun: Lawrence has been burned, its leaders jailed. Furious that there was no resistance, Brown calls for a retaliatory strike against his Southern neighbors. With the words, "The Northern army is born tonight," he leads Oliver and several others off, carrying swords.

In his home in Concord, Massachusetts, Ralph Waldo Emerson praises Brown as the hero who saved Kansas. Amos Lawrence, the wealthy manufacturer for whom the Kansas town was named, decries Brown's lawlessness. While Emerson and Henry Thoreau defend Brown, he is given supplies and clothing by the people of Concord. Brown declares that he will soon carry his fight into Virginia. Lawrence denounces this as leading to civil war, withdraws his support, and warns the others that if they aid Brown, they too will be guilty of treason. Brown contrasts their luxurious surroundings with the plight of the slaves and elicits even greater sympathy and gifts.

Brown and eighteen men are hiding out in a farm house five miles from Harpers Ferry, Virginia. They need more men and money. Brown asks Douglass to join him, but when the black leader learns that the attack will be against the U. S. arsenal, he refuses. Brown insists that even if they fail, the raid will create such panic in the South that it will lead to civil war, the only means of ending slavery. Martha, now Oliver's wife and pregnant, has also become an abolitionist. Brown confides his doubt and depression to his daughter Annie, who assures him of the love and support of his family. When new recruits arrive with gold he interprets it as a sign to begin.

The attack on Harpers Ferry had failed. Oliver, wounded and delirious, dies singing a hymn with his father. Governor Wise of Virginia is angered at news that the North is proclaiming Brown a hero. He prevents a crowd from lynching the wounded Brown, whom he then interrogates. As reporters take notes, Brown's eloquence puts the Governor on the defensive. When Brown's maps and letters are found, the Governor fears insurrection all through the South. He and Stuart goad the crowd to call for secession and war. A reporter whispers a rescue plan to Brown, who replies, "No! I am now worth inconceivably more to hang than I am to live."

APOTHEOSIS
A church in a Northern state, December 2, 1859

In a church in a Northern state, Douglass and Martha, she holding her baby, address a crowd gathered to mark the moment of Brown's execution in Virginia, and "to witness his resurrection." Douglass and Martha describe Brown's hanging, which the audience sees in large silhouette. "Now bury him!" Douglass says. "You cannot bury him! As long as men love freedom, John Brown will never die."

For Songs, Interviews, Lessons Plans and above text go to http://www.kcopera.org/OurSeason/johnbrown.html

It was a wonderful presentation full of chorals and arias. The composer, Kirke Mechem, has spent 20 years researching my ggg Grandfather and the product of his work is thrilling, sorrowful, hopeful, beautiful and very moving. If you can see the opera, go. Even if you do not like opera, this production will move you, and hopefully make you think.

Alice! Amazing!
I have long been intrigued by John Brown! And now here you are!
I am looking for your email address to contact you directly.
The new Reynolds biography on John Brown is very insightful and helped me come much (realistically) closer to a man who has long been an enigma. I teach a college level U.S. survey course and will be adding a collection of primary source documents on John Brown. The book is one of a series from Bedford St. Martins Press. Stay in touch!!
What do you know of the 150th anniversary of the Raid? I am a member of the Harpers Ferry Historical Association and expect to invest some time in the organization this year and next.

The John Brown "world" is so vast. Yes I know about the 150 year anniversary at HF. I have been tagged to work on the descendents location committee, since one of my primary fields of research is the descendents of JB.

email is jbrownkin@yahoo.com. Please contact me to continue the discussions about the "old man"

This is my blog site http://johnbrownkin.blogspot.com/

Look forward to talking with you more