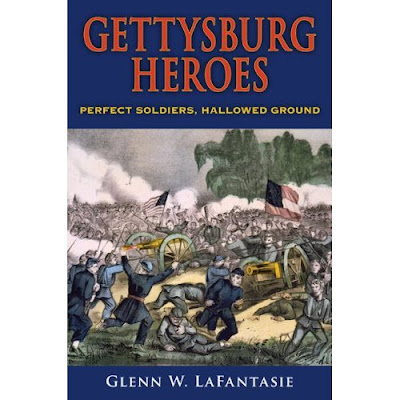 "Perfect heroes were conspicuously absent from the field of Gettysburg, as they are from every battlefield, every war. Every soldier, nevertheless, likes to think his is perfect," LaFantasie states that the subtitle of his work is meant to be ironic. The author reviews the passing of certain soldiers through the battle of Gettysburg and the history of their interpretations. Longstreet, Chamberlain, Haskell, Oates, Lincoln, Eisenhower, Montgomery, as well as LaFanatasie and his daughter Sarah, have each passed through a Gettysburg experience and some have encountered it several times.

"By and by, out of the chaos of trash and falsehood that newspapers hold, out of the disjointed mass of reports, out of the traditions and tales that come down from the field, some eye that never saw the battle will select[,] and some will write[,] what will be named the history. With that the world will be --and if we are alive we must be--content." Haskell, recognized as one of the finest soldier-writers of Gettysburg primary sources, is quoted by LaFantasie to explain the business of sorting the various interpretations of the battle. The 145 year construction effort by participants and historians to describe and explain the battle has produced a plethora of writing. Personally, CWL shied away from this book for that reason, but after reading the first chapter LaFantasie won this reader over. CWL also had a similar experience with Twilight at Little Round Top: avoidance until reading the book and then a regret when it was over. 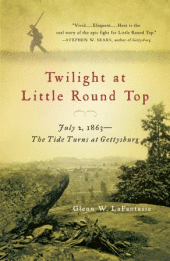 On Longstreet, LaFantasie reconciles Lee's 'Old Warhorse' with McLaw's 'A Humbug' sieves the man and his reputations. Evaluating Longstreet during his Mexican War, his Civil War and and his post-war careers, the author understands Longstreet to be a natural warrior whose finest moments occurred in combat as a steady and dependable soldier who had unpolished manners and a high degree of ambition. At times, he would be viewed as disrespectful to authority and abusive to his subordinates, especially in the eyes and by the pen of Jubal Early, a Lee defender and a writer of the 'Lost Cause' interpretation of the war.

Among the highlights in Gettysburg Heroes: Perfect Soldiers, Hallowed Ground is the chapter on Frank Haskell and the creation of his Gettysburg memoir which was actually a consciously drafted long letter home. Several chapters describe the several war time and post-war collisions between Joshua Chamberlain, 20th Maine, and William Oates, 15th Alabama; and in several more chapters, William Oates, as a fugitive from the law, as a Confederate captain and colonel, as a lawyer and politician, and as an historian is revealed to be quite similar to Longstreet. Both Confederates were warriors, who at times were ill-mannered, abrasive sentimentalists and as soldier-writers hda selective and creative memories. In particular LaFantasie explains Oates creation, distribution and further enhancement of the false story of Union Brigadier General Farnsworth's suicide on July 3rd during a cavalry charge between Bushman's Hill and the Slyder Farm. In this eighth chapter, LaFantasie reveals subtle themes that appear tangential throughout this book: how successful were soldier-writers when they wrote history? How is evidence created and how is it handled and mishandled? The misreporting by an eye-witness of a battlefield death, the addition of details to this report, the telling, re-telling and finally being offered as history is thread throughout the book. These themes appear tangential but at the close of the book they are fully set before the reader.

The battlefield and the park have their histories created by warriors, veterans, and the national park service. LaFantasie lays before the reader "the number of egregious errors" the NPS has made, including the building of the visitors center ('a drum on its side') on the Pickett-Pettigrew-Trimble Charge site, granting permission the National Tower to be built in the midst of the battlefield, and giving to Gettysburg College a portion of the battlefield and then watching the portion bulldozed.

In the last chapter, LaFantasie places in context Chamberlain's, now famous "'In great deeds something abides. On great fields something stays.' paragraph. For author Bruce Catton 'echoes are felt' and not heard LaFantasie remarks. LaFantasie and his daughter walk the ground of the battlefield and written wartime reports are examined against the terrain. On the rocks contested by the Maine soldiers and the Alabamians, the author, as a young man, became reconciled to the early death of his father. Near the same location, LaFantasie's daughter Sarah asks him, "Did you feel it?" and he has no idea what she is talking about. She says "I feel something." Something nameless, something intangible, some emotional fog or shadow that made her feel sad. Later the author recalls that it was there, on the southeast slope of Little Round Top and near the 20th Maine monument, that he had released his own sadness over his father's death.

"Our pasts are locked inside us" and the past is not always tangible and knowable. "But sometimes it can be seen and sometimes it can be felt. . . . . On a misty spring day, across the lush fields and hills of Gettysburg, my daughter and I felt the far-reaching echoes of our past." LaFantasie's conclusion underscores Chamberlain's remarks concerning how spirits linger at Gettysburg and consecrate the ground as an oracle, a vision-place, for souls of flawed heroes.

Glenn LaFantasie continues to draw readers into the story of Gettysburg. By turns very direct and very subtle, Gettysburg Heroes offers concise and clear stories of soldiers, civilians, generals and presidents. Those who lived through the battle and returned, or came to Gettysburg after the battle, found that their personal pasts were locked both within the battlefield and within themselves. The Gettysburg battlefield both wounds and heals us, and at times allows us to hide within its story and then reveals us to ourselves. As William Faulkner said, "The past is not dead. It has not even passed." The truth make us transparent to others and ourselves. Well written history does the same. LaFantasie's writing brings us a little closer to the truth about the battle of Gettysburg and how it has become an oracle for this nation.
Posted by Rea Andrew Redd at 10:23 AM