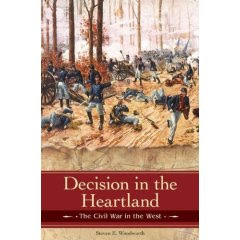 The verdict is in: the Civil War was won in the "West"--that is, in the nation's heartland, between the Appalachian Mountains and the Mississippi River. Yet, a person who follows the literature on the war might still think that it was the conflict in Virginia that ultimately decided the outcome.

Each year sees the appearance of new books aimed at the popular market that simply assume that it was in the East, often at Gettysburg, that the decisive clashes of war the took place. For decades, serious historians of the Civil War have completed one careful study after another, nearly all tending to indicate the pivotal importance of what people during the war referred to as "the West."

In this fast paced overview, Woodworth presents his case for the decisiveness of the theater. Overwhelming evidence now indicates that it was battles like Fort Donelson, Shiloh, Chattanooga, and Atlanta that sealed the fate of the Confederacy-not the nearly legendary clashes at Bull Run or Chancellorsville or the mythical "high-water mark" at Gettysburg. The western campaigns cost the Confederacy vast territories, the manufacturing center of Nashville, the financial center of New Orleans, communications hubs such as Corinth, Chattanooga, and Atlanta, along with the agricultural produce of the breadbasket of the Confederacy.

They sapped the morale of Confederates and buoyed the spirits of Unionists, ultimately sealing the northern electorate's decision to return Lincoln to the presidency for a second term and thus to see the war through to final victory. Detailing the "Western" clashes that proved so significant, Woodworth contends that it was there alone that the Civil War could be--and was--decided.
Steve E. Woodworth is Professor of History at Texas Christian University in Fort Worth, Texas. He received his Ph.D. in history from Rice University in 1987 and has taught at colleges in Texas, Oklahoma, and Georgia. He has authored, co-authored, or compiled twenty-six books, including Nothing but Victory; While God is Marching On; and Jefferson Davis and His Generals.

Source: text supplied by the publisher