Forthcoming---Demon of the Lost Cause: Sherman, His Autobiography, And His Spin 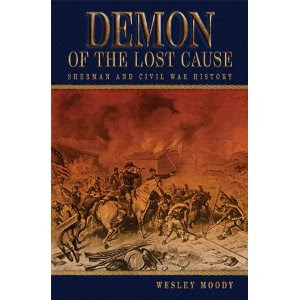 "Not too many years ago a speaker at a Civil War symposium in St. Louis announced that when the program was over, he was going to visit the local cemetery where General William T. Sherman is buried to “piss on his grave.” Not the most temperate of notions, perhaps, but one that certainly reflects the attitude of millions of Southerners past and present toward one of history’s most controversial commanders. No general on either side generated more visceral animosity, nor has any other leader in the Civil War been so damned on the basis of myth, prejudice and general ignorance.

"Sherman was living in Louisiana when the crisis erupted, and in fact few other future leaders of the Union’s armies had as close an experience and understanding of the South as he did. And oddly enough, in light of his later reputation, Sherman rather liked the South, and felt some sympathy for its plight in 1861 when it found itself backed into a corner over issues surrounding slavery. One of the answers to critics who condemn him for the damage done during his march across Georgia in 1864 is that he saw it as a way of shortening the war, and thereby lessening the overall injury to the South of more years of protracted war.

"As for the widespread destruction that he perpetrated in Georgia in his March to the Sea, a great deal of it is simple myth. Scores of the houses and barns that he supposedly burned are still standing. His army, in fact, cut only a narrow swath either side of its route of march to Savannah, and even his goal was primarily seizure of foodstuffs needed by his army, and destruction of anything that could aid the Confederate war effort. There was virtually no sanctioned wanton destruction. Even the burning of much of Columbia, South Carolina, was against his orders, though he did not try over hard to prevent it once commenced.

"In his new book Demon of the Lost Cause: Sherman and Civil War History, Wesley Moody takes on this myth and many others, including those that Sherman himself helped to create or promote. No man who has been at the center of epochal events is immune to the temptation to take the high ground in crafting his own place in history, and Sherman was no exception. His two-volume memoir, published in 1890, became almost as controversial as the general himself, and Moody does an admirable job of sifting the fact from the “spin.”

"What emerges is a Sherman who was neither beast nor saint, neither a cruel destroyer of civilians and their world, nor a far-seeing prophet of 20th-century warfare. Historians and readers of today may find as much stuff of controversy in Moody’s depiction of Sherman as our ancestors did in the man himself, but no student or study of the man who made war a sort of hell can afford to ignore Demon of the Lost Cause in the future.

"By the way. The historian in St. Louis changed his mind, and Sherman’s grave remains to date, so far as is known, unsoiled."
Posted by Rea Andrew Redd at 5:03 PM