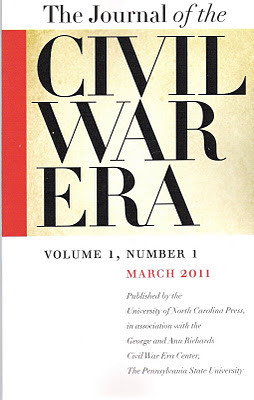 The Journal of the Civil War Era announces the publication of its December 2011 issue, Voume 1 number 4. The journal is a collaborative effort between the George and Ann Richards Civil War Era Center at Penn State and the University of North Carolina Press. It canvasses the history-cultural, social, and economic as well as political and military-of the United States from roughly 1830 to 1890.

The contents of the December 2011 edition are as follows:

Further information about the journal, including subscription rates, may be found at: http://www.journalofthecivilwarera.com/
Posted by Rea Andrew Redd at 8:57 AM