New and Noteworthy---The Real War Has Gotten Into A Book: The Civil War Medical Photography Archive of Harewood Hospital 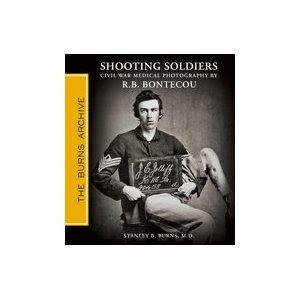 Clinical photographs taken of the wounded soldiers taken by Dr. Reed Bontecou, were at one time among the collections of the Army Medical Museum. Later scattered, many are now in Shooting Soldiers: Civil War Medical Photography, Book One: Wounded Soldiers Identified, 101 Regiments From the Harewood Hospital Album. Dr. Stanley Burns' 35 year pursuit benefits readers with this publication, the size of which is 5 3/4" by 6 3/4".

The first of several projected this volume, this volume of portraits present wounded soldiers' partially clothed with their wounds exposed and each patient holds a chalkboard with their names on it. The image of. J. E. Jolliff, Company K, 116 Pennsylvania Volunteers graces the book's cover. An extensive introduction offers a history of the photographs, a biographical sketch Dr. Reed B. Bontecou, an explanation of new weapons and the war's tactics, and a brief history Harewood Hospital.

The photographs are presented as 3.5 x 5.5 images with one photograph per page. Page 37 is typical of the format. "David R. Tempelton, Co. A., 46 NY, Petersburg, April 2, 1865, gun shot wound, left eye, [photograph taken] at time of admission. At 16, was admitted to HHH, Arpil 5 with gunshot wound of the head. Ball hit left temple, just back of outer angle of eye, grazing malar bone and eyeball, destroying sight; passed off producing fles would of the tip of the nose. Was wounded at Petersburgh April 2nd 1865. He is now well."

There are indices of the regiments, and the battles at which his subjects received their wounds. The bibliography of includes both print and online primary sources. This book aids general readers of the war ,and those readers specializing in medical history and Civil War photography. In summary, CWL recalls the words of the radio correspondent who May 6, 1937 watched the explosion and destruction of the zeppelin Hindenburg at Lakehurst, New Jersey. "The humanity! Oh! The humanity!
Posted by Rea Andrew Redd at 5:40 PM