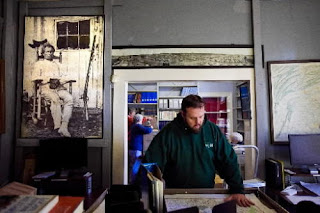 Seminary Building Will Be Refurbished Into A Museum To Show Its Role In The Battle Of Gettysburg, Steve Marroni, The Evening Sun, November 2, 2011.

One of the most historically significant Civil War buildings in private hands soon will be refurbished into a state-of-the-art museum and will be open to the public just in time for the 150th anniversary of the Battle of Gettysburg. Schmucker Hall at the Lutheran Theological Seminary at Gettysburg was a lookout point and the center of the Union’s defenses the first day of the three-day battle. And in the following days, it served as a field hospital for hundreds of wounded soldiers.

Seminary Ridge Historic Preservation Foundation President John Spangler said the museum will teach people about the building’s role in the battle, as well as the sig­nificance religion played in the lives of Americans during the time of the Civil War.
“What’s amazing to me is that on both sides, Union and Confederate troops sat by the fire at night, and read from the same Bible", Spangler said.

The seminary, along with the Adams County Historical Society and the preservation foundation, received a $4 million state grant last week for The Voices of History campaign, which will transform the 1832 building into a fourstory, state-of-the-art museum. The building, once called the Old Dorm, has not been in use for students since the 1950s. Currently, the top two floors are not being used at all because of unsatisfactory heating and cooling and lack of humidity control, but the bottom two are a part of the historical society, where much of its collection is on display.

Spangler said Schmucker Hall played a significant role in the first day of the battle. The cupola at the top of the building has been a prominent feature for many historians, and was where Union cavalry Gen. John Buford observed the approaching Confederate army and met with Gen. John Reynolds to develop a plan. 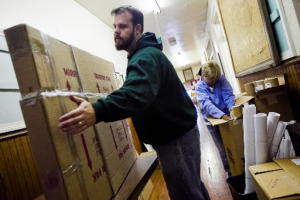 Bradley Hoch, chairman of the Adams County Historical Society board of directors, said the Union's First Corps suffered 5,700 casualties killed, wounded and missing out of 8,000 soldiers as they defended the position at Schmucker Hall, giving the Union time to fortify other key points along the battlefield. He said the Union essentially traded lives for time. Each floor of the museum will have interpretive displays, bringing to life the history of Schmucker Hall, Spangler said. The fourth floor will be dedicated to the events of the first day of the battle that occurred around Schmucker Hall. The third floor will follow Schmucker Halls use as a field hospital during the remainder of the battle, and through September of that year. The second floor will focus on the moral and social history of the period, and will feature displays on faith, issues of slavery and freedom and the Underground Railroad, Spangler said. The first floor will be a reception area.

The museum will include murals, artifacts, and audio and video displays. It also will feature interactive maps, recreations of hospital scenes with die-cast statues and much more. The historical society is now packing up artifacts and moving them out of Schmucker Hall in preparation for construction, which is excepted to begin in December. The museum is expected to be ready by spring 2013.