Off Topic---Stephen King 'Creeps Me Out' 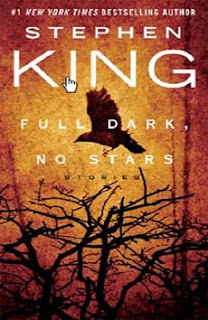 Once a decade CWL reads a book by Stephen King. During the previous decade it was On Writing which is in part a memoir and in part a writer's workshop lecture. It reveals a practical view of his craft and the contents of his toolkit. While looking for something that would 'creep him out' during autumn's dying of the light, CWL turned to King's 2010 Full Dark, No Stars.

The work Richard Matheson, H.P. Lovecraft, Edgar Allan Poe is echoed and enhanced by King. In Full Dark, No Stars's first story '1922' is reminiscent of Poe's A Tell-Tale Heart. A farmer, making his son an accomplice, kills his wife; the motivation is that the wife has inherited land that she wants to sell to a pork rendering plant. The story meets King's checklist of being propelling and assaulting. But the characters' marionette strings are pulled conspicuously by King. The wife could have sold the land in a heart beat, taken the money and moved to Omaha; the author stops her. Even before the murder the farmer, who is not worth a pinch of owl's dung, lets rats overrun his barn. That is especially bad when the wife's ghoul sends them to do her bidding. CWL lived 20 years on a dairy and beef farm. No rats, just cats. Though the story meets King's criteria, set forth in an essay at the end of the book, of running at full speed on an open highway, 1922 has a few large and obvious potholes.

On the other hand, the next three stories, Big Driver, Fair Extension and A Good Marriage are are nearly irristable. Well plotted, with characters that are obnoxiously attractive and climaxes these stories are subtle, and satifying. The stories have a quick pace. Mundane details and slight metaphors fix images in the mind of the careful reader. The romance author in Big Driver can be a bit cloying; but her cat and her GPS hold to the Socratic Method and ask questions that keep the author and the reader on task. In Fair Extension, a devil appears with an offer that should have been refused by a loan officer with terminal cancer. This story is a long list of painful circumstances imposed on the banker's best friend and his family. The ending is both striking and disappointing. The protagonist is left staring at the planet Venus, thinking that life is good. The scene is reminescent of work by playwright Henrik Ibsen and the novelist Norman Mailer. 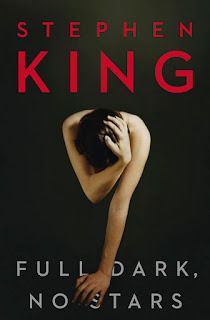 A Good Marriage offers a question and an answer. How would a wife who has a good marriage respond when she learns that her husband is a serial killer? This is King's most successful short story among the four in Full Dark, No Stars. The main character's narrative voice is clear and relates her utterly boring, normal life in a marriage with two children. Like the other main characters in these stories, the wife discovers a double life witin her marriage partner, and then she discovers her own double life. In each of these stories these characters talk to themselves in slang and baby talk. It is annoying. Yet for CWL the overall effect of these four stories is that they do indeed 'creep him out.'

After the four short stories, King offers a further look at his motivation. He has been writing for the market place since he was 18 and has been in the trade for over 40 years. It's not about the money reports the fiction writer who is a multi-millionaire. King can not stop writing fiction; he has his own criteria and standards. You might like some of his stories; you might not like some of his stories. He might judge himself as more successful in some stories and less so in others. There will be more to come. CWL expects to continue to read King's work, sometime in the next decade, just like the past four decades.
Posted by Rea Andrew Redd at 9:38 AM