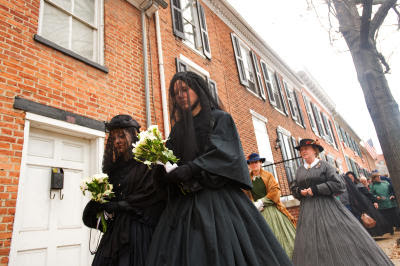 Sadie Shriver, An Eyewitness To The Battle of Gettysburg, Died at age 18, Jacqueline Palochko, The Evening Sun, November 20, 2011.

It's a solemn procession. Women are walking, holding flowers, with their hoop skirts hitting the fallen brown leaves on the ground. Men in top hats, staring straight ahead under the gray November clouds. Slowly, the crowd moves to Evergreen Cemetery in Gettysburg on Sunday morning. And around the gray, faded tombstones, they gather. More than 130 years ago, this is how the loved ones of Sadie Shriver might have said goodbye to her. But when her family buried her, one thing was missing -- a headstone.

This was a young woman who came from one of the oldest families in Adams County, Nancie Gudmestad, director of the Shriver House in Gettysburg said. A little girl who kissed her father, George Shriver, goodbye as he rode off to war. An eyewitness to the Battle of Gettysburg when she was just 7 years old. And when she was 18 years old -- two weeks before her 19th birthday -- she died from tuberculosis and was laid to rest in Evergreen Cemetery. Yet -- for some unknown reason -- her grave has been unmarked since she died in 1874. Until Sunday.

On what would have been her 156th birthday, a ceremony was held to unveil a headstone at Sadie's grave. A funeral procession with a couple dozen people, including re-enactors, traveled from the historical Shriver House on Baltimore Street to the cemetery.

So, they gathered around Sadie's grave. And spoke of how she must have seen the bloody, wounded soldiers during the battle. How she heard their last cries for help before they died. How she smelled gun smoke in the air. And among the crowd were some distant relatives of Sadie. A few years ago, Diane Weikert Dolan, of New Jersey, visited Gettysburg and toured the Shriver House. And when she started to hear the stories of the Shriver family and Sadie's mother -- Hettie Shriver, whose maiden name was Weikert -- it all sounded familiar. "They started telling me my family history," she said. 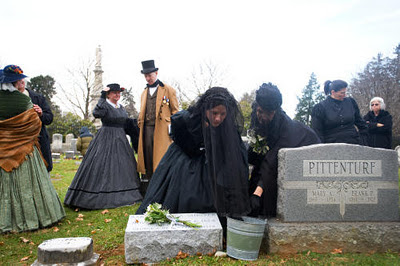 For Becki Powell, who now lives in Hershey, her family history was right under her nose. When she was living in Littlestown, she was a tour guide for the Shriver House. Around the same time, she started looking through books her family had been using to record their history. And there it was -- notes on Hettie and George Shriver in her family history book. Since then, Powell has visited Evergreen Cemetery to pay respects at the graves of her distant, long-lost relatives. She found the grave of Sadie's younger sister, Mollie; and their grandparents, Sarah and Jacob Weikert. But she always had trouble finding Sadie's. "I find this all very moving," Powell said of the ceremony for Sadie.

And before they left -- before they went back to their Sundays -- each visitor left a pebble on Sadie's grave. It's a Jewish tradition, Gudmestad said, to let the dead know they haven't been forgotten. "Sadie will know that someone came to visit her today," Gudmestad said.