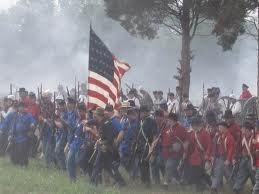 Thousands of Civil War reenactors and spectators converged on Manassas in July. “Our hotel is air-conditioned, right?” Most Civil War reenactments are done for the pure pleasure of recapturing historical moments, educating others about our past, and sweating off large amounts of weight in authentically heavy uniforms. But for the 150th anniversary of the First Battle of Bull Run, Manassas City and its businesses in Old Town were actually able to make some money, according to a new report issued by the city’s community development department.

. . . the report states, “The Sesquicentennial of the First Battle of Manassas was a singular event that is not expected to be repeated.” And what happened was that the city as a whole collected 14.4 percent more in meals taxes than in July 2010, which translates into an additional $811,500 in revenue for Manassas restaurants, the report figures.

In Old Town Manassas, shops saw increases of 55 percent for sales taxes and 21 percent for meals taxes, for more revenue. And sales at the Manassas Museum jumped 700 percent over the same time last year. ne party who didn’t cooperate: God. It was over 100 degrees most days of that July weekend, felt way hotter, and some events were canceled. But even this was turned into a positive because it allowed emergency management agencies to try out their response capabilities, and as a result there were no significant injuries, the report found.

So what does this mean for the sesquicentennial of the Second Battle of Bull Run, August 2012, a larger and even bloodier battle? Get those cash registers ready. And cool it with the heat waves, Big Man.

CWL: Here is the 27 page report of An Analysis of the City of Manassas Participation in the Sesquicentennial of the Battle of First Manassas, July 21 – 24, 2011