New and Noteworthy---Lincoln, Two Constitutions And The War 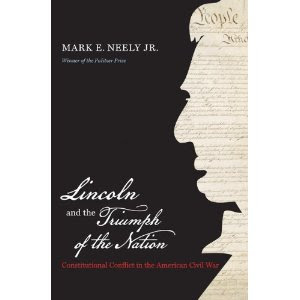 From the publisher: The Civil War placed the U.S. Constitution under unprecedented--and, to this day, still unmatched--strain. In Lincoln and the Triumph of the Nation, Pulitzer Prize-winning historian Mark Neely examines for the first time in one book the U.S. Constitution and its often overlooked cousin, the Confederate Constitution, and the ways the documents shaped the struggle for national survival.

Previous scholars have examined wartime challenges to civil liberties and questions of presidential power, but Neely argues that the constitutional conflict extended to the largest questions of national existence. Drawing on judicial opinions, presidential state papers, and political pamphlets spiced with the everyday immediacy of the partisan press, Neely reveals how judges, lawyers, editors, politicians, and government officials, both North and South, used their constitutions to fight the war and save, or create, their nation.

Lincoln and the Triumph of the Nation illuminates how the U.S. Constitution not only survived its greatest test but emerged stronger after the war. That this happened at a time when the nation's very existence was threatened, Neely argues, speaks ultimately to the wisdom of the Union leadership, notably President Lincoln and his vision of the American nation.

CWL: The author of The Civil War and the Limits of Destruction , The Last Best Hope of Earth: Abraham Lincoln and the Promise of America , The Confederate Image: Prints of the Lost Cause and many others, Mark Neely offers a thorough discussion secession, habeas corpus, the presidency, soldiers in courtrooms, the police state of Richmond Virginia, and states' rights in the Confederacy. Readers will be informed and possibly provoked. In a lifetime of studying Lincoln, the Constitution of 1787, the Confederate Constitution, civil liberties on both side of the Mason-Dixon Line, Mark Neely offers both a distillation of his previous works and new information and interpretation of how the Constitution of 1787, as a legal foundation, was stressed and saved in the courtrooms of The North, The South and The West during the war.
Posted by Rea Andrew Redd at 1:23 PM