New and Noteworthy---The Battle of the Crater: A Novel Entertains and Informs 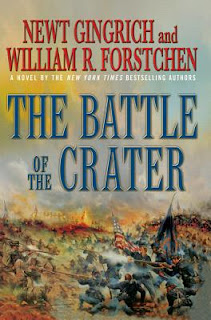 Among the baggage that Republican presidential candidate Newt Gingrich brings to the campaign, his successful career as a fiction writer is not being debated. During 2011 and 2012 much will be made of the alternative path that is being offered by this candidate. There is no discernible agenda in Gingrich's fiction other than to entertain and educate readers. With The Battle of the Crater, Newt Gingrich and William R. Forstchen tackle historical fiction without making alternative history.

Of the ten or so novels that the team of Gingrich and Forstchen have written CWL admits to having read none of them. Richard Slotkin's The Crater is on the short list of best Civil War fiction. Also, Richard Slotkin's No Quarter: The Battle of the Crater, 1864 will stand the test of time for being the best treatment of the battle. So, CWL came to Gingrich's and Forstchen's novel with limited expectations and was surprised by having them exceeded. The authors do not simply supply characters, attitudes, and story for the sake of the marketplace. The aspirations of African American troops, the terrain and importance of the Elliot's Salient entrenchments, the failures of generals are presented accurately and in a compelling fashion.

The Battle of the Crater was just one day of the nearly nine month siege of Petersburg, Virginia. On July 30, 1864, the Federal army exploded an underground gallery under the Confederate earthworks. Federal and Confederate generals and soldiers, in a general sense, are accurately portrayed. The story unfolds with the help of a fictitious character. James Reilly, newspaper sketch artist and friend of Lincoln, for the most part narrates the novel. The historic character Sergeant Major Garland White of the 28th USCT regiment, an escaped slave, recruiter, non-commissioned officer and informal chaplain, shares narrative duties with Reilly. Both are compelling figures and the novel rests easily on their shoulders.

The author's novel doesn't lag, in part because like most historic fiction, time and characters are compressed, but events and plot points are not hastily inserted. The major and minor characters are well drawn and the resolution will be heart felt by readers. Written for the mass market, The Battle of the Crater: A Novel succeeds in both entertaining and informing.
Posted by Rea Andrew Redd at 3:19 PM