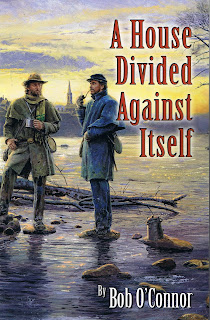 Charles Town historian Bob O'Connor says his newest Civil War book, "A House Divided Against Itself," is a historical novel that's based on a true story. While it's technically fiction, O'Connor said the four main characters were real people, and the story about them is "mostly true." O'Connor told The Herald Mail of Hagerstown, Maryland, that he studied 90 letters, plus records from the National Archives and Army War College, to create the story of brothers John Wesley and William Culp.

The brothers grew up in Gettysburg, Pennsylvania, but John Wesley moved to Shepherdstown, then to Virginia. He fought for the Confederacy. William, meanwhile, joined a Gettysburg militia that eventually became part of the Union's 87th Pennsylvania regiment. Their units battled in the Shenandoah Valley between 1861 and 1863, but O'Connor said the brothers never met during the conflict. His other key characters are John Wesley's best friend, Johnston "Jack" Skelly Jr., who joined the Union army, and Mary Virginia Wade, Jack's girlfriend. The story ends with the Battle of Gettysburg.

O'Connor said the 230-page book was inspired by a lecture that historian James C. Price gave on the Culp brothers in Martinsburg. It's available online at O'Connor's website, at Four Seasons Books in Shepherdstown, and at the Antietam National Battlefield gift shop in Maryland. He is the author of The Perfect Steel Trap: Harpers Ferry 1859 a novel, The U.S. Colored Troops at Andersonville Prison a history, and editor of The Life of Abraham Lincoln as President: A Personal Account by Lincoln's Body Gaurd, War Hill Lamon. His website is Bob Oconnor Books.
Posted by Rea Andrew Redd at 10:30 AM