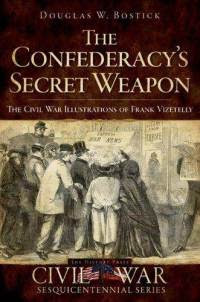 Frank Vizetelly's illustrations have for decades been viewed in coffee table books on the Civil War. Yet the name of this graphic artist usually does not ring a bell with probably most readers. Bostick's book remedies the situation. Placing Vizetelly in the context of mid-19th century print journalism is helpful but Bostick offers only a page and a half on how the work of a sketch artist moves from the sketch pad to news print. Strengths of Bostick's work is the close attention paid to Vizetelly's travels inside the Confederacy and his success in getting the illustrations exported to London.

As a correspondent for the London Illustrated News, Vizetelly is challenged by the U.S. War department July 1861 after the Federal defeat at Bull Run. He then enters the Confederacy and views the battle of Fredericksburg and the 1863 Mississippi Campaign. The artist is quite comfortable among the plantation aristocracy, the cavalier and chivalrous officers of the Confederate forces. With a clear and concise narrative, Bostick provides many of Vizetelly's dispatches and finished sketches. Vizetelly reports as if he is at Chickamauga, but Sorrel, Longstreet's aide, reports in his Recollections of a Confederate Staff Officer,that appears that Vizetelly arrived "long after the battle."

Vizetelly's anecdotes at times ring true and at other times there is a false ring to them. Did Vizetelly loan Jefferson Davis funds for his escape from Virginia? Bostick's account takes Vizetelly's memoirs at face value. This may leave some readers recalling the saying that the first casualty of war is truth. Was Vizetelly's illustrations a secret weapon of the Confederacy? Upon finishing Bostick's the book, CWL's reply is The Scots' Verdict: unproven.

Having no index and no bibliographic notes, The Confederacy's Secret Weapon: The Civil War Illustrations of Frank Vizetelly is not conducive to much further research. The brief bibliography does not list a book or article by Henry Vizetelly though on page 79 Bostick quotes from one. Yet, in providing a fine account of the life and times of Frank Vizetelly, sketch artist and correspondent of the London Illustrated News, Bostick offers a fine album of illustrations, a brief life on an English sketch artist and an introduction to the world of Civil War journalism.
Posted by Rea Andrew Redd at 1:32 PM