CWL --- 'At The Mercy of Decisions Made Elsewhere": Virginia's Secession Convention 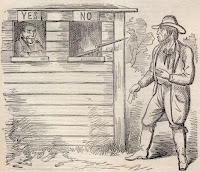 Roberston sets forth three stages of the Virginia convention of 1861: February 13 through March 9, March 15 through April 3, and April 4 through April April 16. He traces the dissolution of the Unionist and Moderate ranks over the period of sixty days. The first stage begins with the failure of the Washington Peace Conference, the second stage ends with the submission of the Committee on Federal Relations report, and the third stage ends with Lincoln's call for 2,340 troops from Virginia.

On February 4, of the 152 delegates selected by 145,700 voters, less than 20% were secessionists. Of the remainder their were 92 moderates and 30 Unionists. These Unionist appeared to be conditional Union men; separation from the Union was unbearable unless the Federal government did not guarantee the protection of slavery in all states and territories. Pointedly, the Fugitive Slave Act had to be rigorously enforced. For these Unionist, the thought of Virginia leaving the Union was nearly unimaginable but the idea of taking up arms against the other slave holding states was unthinkable.

The March 4 inaugural speech of Lincoln did not guarantee the rigorous enforcement of the Fugitive Slave Law and insinuated that the Federal government would leave slavery alone where it existed but expeditiously relief the territories of any expansionist threat by slaveholders. The April 12 firing on Sumter and the April 15 call for troops dissolved the commitment of the Unionist and moderate state convention. The first vote for secession was 88 in favor and 55 against. Surprising, the Valley representatives were 10 in favor and 17 against secession. The state referendum on May 23 produced 125,950 votes in favor of secession and 20,373 against.
The four northwest counties of Virginia, the panhandle of Wheeling and close to Pittsburgh, Pennsylvania voted against secession by a 20-1 ratio of the popular vote.

Robertson's essay, along with Ernest Ferguson's From Ashes to Glory: Richmond at War, emphasizes the place of Richmond newspapers as being one of the several excoriating forces at work during December 1860 through April 1861. On March 21 The Richmond Examiner stated "The conceited old ghosts who crawled from a hundred damp graves to manacle their State and deliver her as a hand-maid to the hideous Chimpanzee from Illinois have determined that not one word of their rubbish and gabble will be lost to posterity." To me this sounds much like how Hunter S. Thompson in the The Rolling Stone worked on Richard M. Nixon.
Posted by Rea Andrew Redd at 10:53 AM